Elvis
The King of Rock and Roll
The King

Elvis Aaron Presley was a popular American singer and actor. A cultural icon, he was widely known by the single name Elvis. He was often referred to as the "King of Rock and Roll" or simply "the King".

Although Elvis never actually appeared in any Disney productions, his songs are heard in the Lilo & Stitch movies (mostly due to Chris Sanders being a big fan of Elvis himself). He has been impersonated by several Disney characters; he was spoofed by Stitch several times in his franchise, by his owner and best friend Lilo Pelekai (who is an Elvis aficionado) in Lilo & Stitch: The Series, by the Ice Cream Man in Leroy & Stitch, by Mickey (figurines only) and Donald, by Genie in Aladdin and the King of Thieves and the Aladdin TV series (Aladdin, Sultan and Iago as well), by Timon, Pumbaa and Herman in Timon & Pumbaa, by Terk in The Legend of Tarzan, by David Gordon and Matt McGuire in Lizzie McGuire, by Maurice in Marsupilami, by Tamaa in The Lion Guard, and by Liver Lips McGrowl in the Country Bear Vacation Hoedown and Country Bear Christmas Special. In Cars, an RV called Elvis also spoofs him. He was considered for the role of Tom Piper in Babes in Toyland but the part instead went to Tommy Sands.

He was also mentioned in Muppets Most Wanted, The Proud Family episode "Culture Shock", the Wizards of Waverly Place episode "Rock Around the Clock", and the Teen Beach Movie. In the Hercules episode "Hercules and the Prom", Icarus quotes Elvis' famous phrase: "Thank you. Thank you very much." Hallie Parker does the same thing after playing a trick on Annie James in the 1998 remake of The Parent Trap. Lizzie McGuire's animated ego states, "Ethan has left the building," in the Lizzie McGuire episode "One of the Guys", referencing the phrase used by public address announcers at the end of Elvis' concerts.

Additionally, his song "Teddy Bear" was made the subject of a music video in DTV Romancin', set entirely to clips of Disney's bear characters, particularly Bongo. "Jailhouse Rock", "Rubberneckin'", and "Burning Love" are all heard in The Game Plan; a cover version of "Burning Love" by The Mike Eldred Trio is also played in the Planes: Fire & Rescue trailers.

The Bonkers episode "What You Read is What You Get" featured a group of Elvis Impersonators.

Presley's song Burning Love was indirectly mentioned in the film, Avengers: Infinity War, when Wong said that an ice cream flavor called "A hunk of hulk of burning fudge" was his favorite.

He was played by David Keith in the Touchstone Pictures movie Heartbreak Hotel.

Lilo pointing to an image of Elvis in Lilo & Stitch 2: Stitch Has a Glitch

The Sultan as Elvis

Timon and Pumbaa as Elvis

The Great Elvises of history from Muppets Tonight 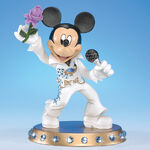 Elvis the RV from Cars
Community content is available under CC-BY-SA unless otherwise noted.
Advertisement