Brown anthropomorphic eagle (or white in some stories)

Gyro Gearloose, Super Goof, Duck Avenger, Super Daisy, Clover Leaf, Super Daisy, Iron Gus, Mickey Mouse
Emil Eagle is an anthropomorphic eagle created by Jack Bradbury, Steve Steere and Vic Lockman. He is a villainous scientist that first appeared in Donald Duck #102 as a rival to Gyro Gearloose, Duckburg's resident inventor. As Gyro's polar opposite, Emil's intelligence, while significant compared to most, is rather mediocre overall. As such, he often resorts to wicked practices such as lying, cheating and stealing to obtain inventions, claiming them as his own. What he lacks in craft and skill, he makes up for with cunning.

Emil Eagle first appeared in The Evil Inventor in May of 1966 as a balding, industrial spy that sought to steal Gyro's hair growth formula. Outside of Donald Duck stories, Emil would later go on to appear as an antagonist for Mickey Mouse and a number of his supporting cast, the most notable of which being Super Goof, who first encountered Emil in The Goofs of Super Goof in February of 1970.

In 1999's Super Goofy and the Return of Emil Eagle, Emil reappeared as a crooked businessman as opposed to a mad scientist. Having built a financial empire with connections to the criminal underworld, Emil had become a successful villain, but secretly missed the thrill that came with battling a worthy opponent—Emil would get his wish in the form of a reinvigorated Super Goof.

Like other villains in Disney comic stories, Emil has occasionally taken part in crossover tales, teaming up with rouge gallery members such as Pete, the Beagle Boys, and Mad Madame Mim In one continuity, Emil is the leader of the Bad-7, a group of supervillains comprised of various Mickey Mouse antagonists. 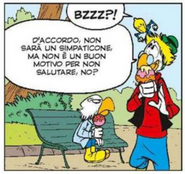 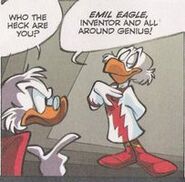 Add a photo to this gallery
Retrieved from "https://disney.fandom.com/wiki/Emil_Eagle?oldid=4199553"
Community content is available under CC-BY-SA unless otherwise noted.