Taylor and Paloma (with Salley)
Emilio Diogenes Estevez is an American actor, film director, and writer. He is the older brother of Charlie Sheen, the son of Martin Sheen, and is best known for being a member of the Brat Pack of the 1980s, starring as Andrew "Andy" Clark in The Breakfast Club and as Kirby "Kirbo" Keager in St. Elmo's Fire. He was also in the 1983 movie The Outsiders as Keith "Two-Bit" Matthews.

For Disney, he is known for his role as Gordon Bombay in The Mighty Ducks trilogy. He also played Jeremy Collier in The War at Home and Johnny Collins in Tex. 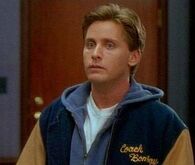 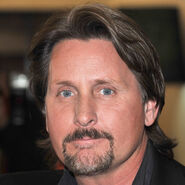 Emilio Estevez in 2011.
Add a photo to this gallery

Retrieved from "https://disney.fandom.com/wiki/Emilio_Estevez?oldid=4072831"
Community content is available under CC-BY-SA unless otherwise noted.