Em and Ed (by Amity)
Cool teens (by Luz)

Hexside School of Magic and Demonics

Both: Amity telling on them
Emira: Being stuck with Edric forever
Edric: Being alone forever

Amity Blight (younger sister)
Emira and Edric Blight are Amity's older twin siblings, who appear in the Disney Channel animated series, The Owl House. Together, they like to cause mischief and sometimes spend time with Luz.

Emira and Edric are the opposite of Amity. They would rather cut class and have fun than study. Sometimes their fun can get a little out of hand, especially when the consequences of their actions could harm others, which they sometimes do not seem to care about. They also like to tease their little sister and call her "Mittens". They would even go as far as exposing her diary all around school. Despite their mischievous and disobedient behavior, they are shown to have a caring side. In "Adventures in the Elements" they became unbearably protective and nice towards Amity as a way of apologizing, and help her with learning new spells.

Roles in the series

Emira "Em" and Edric "Ed" Blight grew up under the privileged tutelage of their high class parents Alador and Odalia Blight. They spent most of their lives relishing their advanced abilities and ended up taking the illusion track upon their acceptance into Hexside School of Magic and Demonics. They are accompanied by their younger sibling Amity who, as older siblings tend to do, is their object to torment. They come to the belief that Amity's stuck up personality needs to be abolished through brute force. To do this, they meet up with the human Luz Noceda, who at the time was trying to befriend Amity. They convince her to join them in their nightly excursions, but this results in Luz getting further away from being friends with her. Feeling that they have done enough, Em and Ed leave to two in an enchanted library overnight and accidentally leave them in danger.

Some time later, Em and Ed learned of Amity's misadventure and seemed genuinely guilty about leaving her, resulting in the two becoming less aggravating. They join their younger sibling in training her for the school year and even witness Luz train with Eda Clawthorne, the Owl Lady, who seemed happy at the thought of trying to feed them to the Slitherbeast. They later aid Luz in training to face Grom when Amity chooses to not do so. They manage to secure their own dates, but unfortunately, both of them were stood up and were forced to watch their younger sister enjoy her time with Luz.[1]

“Mittens has gotten too full of herself. She keeps tattling on us when we cut class.”
“She needs to learn not to mess with people like that... See, we're her family. It's tough love. She needs to learn to lighten up.”
―Emira and Edric's malformed view of "helping" Amity[src]

Emira and Edric's relationship with Amity is complicated. While they do care for her well being, they are not very good at showing it or even have the competence to do so. They believed that exploiting her flaws would get her to break from her shell; unaware that it would make her more miserable than she already was. However following the events of "Lost in Language", the two of have lightened up around her and have become overly protective of her, with Ed adding that they have been apologizing "every day". They continue to tease her, but are not as malicious about it and seem to do it mostly for the sake of Luz whom they know is friends with her. Additionally, they love to call her "Mittens", presumably due to some childhood incident. While they do take their roles as Amity's older siblings seriously, they do not refrain with having fun with her every once and a while.

Emira and Edric seem oddly entranced with Luz, possibly because she is a human and also because unlike Amity, she is much more outgoing and friendly. They attempted to bring her into their mischievous antics, but were visibly disappointed that she would not go through with some of their more sinister acts against Amity. Despite this, they have no ill will against Luz and still treated her as a close friend upon their next meeting with her. They even openly aided her in her upcoming face off with Grom, much to their delight. Between the two of them, Emira appears somewhat enamored with Luz and will openly flirt with her, going so far as to call her "Cutie".

"Because we wuv you baby sister."

"And we still apologize every day."

Edric wants to keep the bat as a pet

Edric: "Being alone forever."
Emira: "Being stuck with you forever." 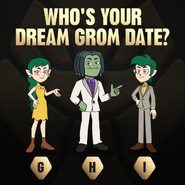 Retrieved from "https://disney.fandom.com/wiki/Emira_and_Edric_Blight?oldid=4536801"
Community content is available under CC-BY-SA unless otherwise noted.