Evan Peters (2012-2015)
Emma Rose Roberts is an American actress, model, and singer. She is well known for her role as Addie Singer in the Nickelodeon show Unfabulous and the title character in the 2007 adaptation of Nancy Drew.

She also starred as Chanel Oberlin on the FOX horror-comedy-drama Scream Queens from 2015 to 2016.

She is the niece of famous Hollywood actress, Julia Roberts and daughter of Eric Roberts.

For Disney, she was a guest star on the Disney Channel animated short series, Take Two with Phineas and Ferb and Jonas L.A. and also recorded "If I Had It My Way" for the soundtrack of the 2005 Disney film, Ice Princess. 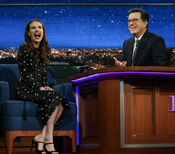 Emma Roberts attending the 2019 Sundance Film Fest.
Add a photo to this gallery

Retrieved from "https://disney.fandom.com/wiki/Emma_Roberts?oldid=3804852"
Community content is available under CC-BY-SA unless otherwise noted.