Gaia Wise
Tindyebwa Agaba (adopted)
Dame Emma Thompson, DBE, is a British actress, voice actress, comedian, screenwriter, author, and activist, who is best known for her roles as Margaret Schlegel in the 1992 romantic period drama film, Howard's End for which she earned an Academy Award for Best Actress, and was nominated for her roles in the period drama film, The Remains of the Day, Jim Sheridan's biographical legal drama, In the Name of the Father (both films released in 1993), and as Elinor Dashwood in Ang Lee's 1995 period drama film, Sense and Sensibility, for which she garnered another Best Actress nomination and won an Academy Award for Best Adapted Screenplay; making her the only person to have won an Academy Award for both writing and acting. Thompson's other notable roles include Richard Curtis's 2003 Christmas-themed romantic comedy film, Love Actually, Sybill Trelawney in the Harry Potter franchise, the titular character of Nanny McPhee in the 2005 comedy fantasy film, and its 2010 sequel, Nanny McPhee Returns (the latter of which was also scripted by her), the 2006 fantasy comedy-drama film, Stranger Than Fiction, and the 2019 comedy-drama film, Late Night.

Thompson is regarded as one of the UK's most acclaimed actresses and is known for her portrayals of enigmatic women, often in period dramas and literary adaptations, and playing matronly characters with a sense of wit. 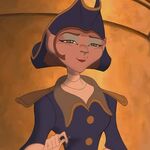 Emma Thompson behind the scenes of Brave.

Emma Thompson at premiere of Saving Mr. Banks in December 2013. 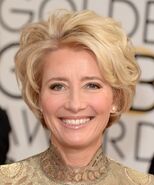 Emma Thompson at the premiere of the Beauty and the Beast remake in March 2017. 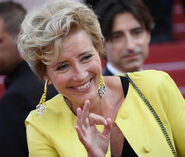