1995-present
Emmanuelle Sophie Anne Chriqui is a Canadian film and television actress and voice actress. She is probably best known for her role as Sloan McQuewick in HBO's Entourage.

For Disney, she voices Paige on the Disney XD animated series, Tron: Uprising, characters in The Proud Family and Phineas and Ferb, and Kelly in Kick Buttowski: Suburban Daredevil. She also played Roxanne in Principal Takes a Holiday and Susie in the Miramax film, 40 Days and 40 Nights. 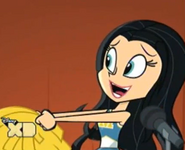 Kelly
(Kick Buttowski)
Add a photo to this gallery

Emmanuelle Chriqui attending the 2008 Toronto International Film Festival.
Add a photo to this gallery
Retrieved from "https://disney.fandom.com/wiki/Emmanuelle_Chriqui?oldid=3861665"
Community content is available under CC-BY-SA unless otherwise noted.