Emmie likes playing soccer with Doc and playing with her toys with her little sister, Alma. She is mostly giggly and playful, but she can get a little worried if her toys aren't working right. Emmie is also sisterly to Alma, mostly in the episode "Blame It On The Rain", when Alma accidentally leaves Moo-Moo outside in the rain and is upset about it, Doc gently tells her that she will dry Moo-Moo in the clinic.

Emmie is a slender girl with brown hair, fair skin, freckles and blue eyes. She also wears two yellow hairclips, a blue T-shirt, jeans with a green belt and light blue mary janes. When sleeping she wears orange pjs with a cat on it. When near water she wears a two piece bathing suit. And during trick or treating she wore a mime costume. 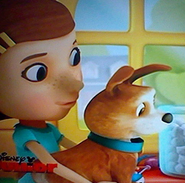 Emmie with Doc in their bathing suits
Community content is available under CC-BY-SA unless otherwise noted.
Advertisement