Disney Wiki
Register
Don't have an account?
Sign In
Advertisement
in: Locations, Inside Out locations, Disney Infinity locations,
and 3 more

Still standing
The Emotion Headquarters is the main center of Riley Andersen's mind in the 2015 Disney•Pixar animated feature film, Inside Out. It is where Riley's emotions operate.

Headquarters is the control center in Riley’s mind where all five Emotions live and work, monitoring Riley’s day-to-day experiences and guiding her along the way.

The Emotion Headquarters is the central location of Riley's mind. It's the room where the emotions stand behind a large control panel and each button makes Riley do a certain action (when Anger pulls two levers at the same time, Riley has a violent outburst). Depending on which emotion uses the console, the console will glow with that emotion's theme color. There is a slot at the far left of the console which light bulbs can be inserted to give Riley an idea. When Riley becomes apathic and is running away, the console gradually turns black and the controls become useless.

Its appearance is that of a condo. The walls are filled with different memories that Riley has, and there are even couches and a staircase. There's apparently a long vacuum tube that can suck out anything. When Joy and Sadness ended up getting sucked out of Headquarters, Anger, Disgust, and Fear were left to control Riley in their absence. It has a large screen in front where the emotions can see through Riley's eyes and project memories, dreams, and daydreams.

Sadness controlling Riley when she was a baby 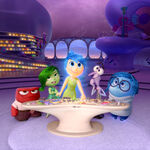 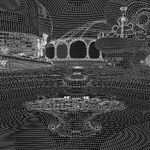 Headquarters (on left) is apparently one VERY tall building

All islands seen from Headquarters

Sadness removes the light bulb from the console

Sadness at the controls

Headquarters with an upgraded console