Emperor of the Boiling Isles

“The Day of Unity is almost upon us, and we have much work to do.”
―Emperor Belos[src]

Emperor Belos is the main antagonist of the Disney Channel animated series, The Owl House. He is the ruler of the Boiling Isles, and founder of the Coven system. Emperor Belos needs the portal to the Human Realm, but he says he does not plan invading it but something else for "the Day of Unity".

Fifty years ago, at the time the series began, witches on the Boiling Isles use to wield and mix magic freely until he came and restricted the usage of magic. He declared that he alone could speak to the island, and convinced the witches of the isles that their usage of magic was wrong. His teachings came into place, his strength grew, and became the Emperor of the Boiling Isles. He taught that mixing magic was wrong and only he had that right. He created the coven system to restrict the use and knowledge of magic, and those who resisted were declared wild witches who would face harsh punishments.

In his years of power, Belos retreated into his castle where he spent his time planning and preparing for what he calls the "Day of Unity", which is a day that will bring the end of wild magic and create a modern utopia. As revealed in "Hunting Palismen," he is Hunter's uncle that took him in after claiming their family was destroyed by wild magic. At an unknown point in time, Belos gained a curse similar to the Owl Beast Curse via the use of wild magic. Combined with the demise of his and Hunter's family at the hands of wild magic, Belos developed a strong hatred for wild magic and all things considerably related to it, even forbidding his nephew from further researching the art.

Emperor Belos wears a mask with two long, upward-facing horns. His eyes are hollow through the mask creating the appearance of having no eyeballs. He wears a large cape with white and brown, as well as gold trim. Under the mask, Belos is revealed to be a middle-aged man with wrinkly lips and a notch on his left ear similar to Hunter's. Most prominently though, he has a large, greenish scar running across his face and down his neck with holes that seem to be eroding it, an indication of how severely his unknown illness is affecting his body.

Belos is described to be an omnipotent and megalomaniac. He is shown to be a strict and commanding figure, impatient and not tolerating failure from his subordinates. His authority is shown to be a powerful one that garners fear and respect. However, he does seem to care about Hunter, his nephew and apparently remaining family member, although he will be hard on him for failure and is very disapproving of the boy's interest in wild magic, but only because he doesn't want anything bad to happen to him. 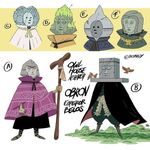