“There's a little magic in all of us... almost all of us.”
―Tagline

Encanto[3] is an American animated musical fantasy comedy film produced by Walt Disney Animation Studios. It was released on November 24, 2021 in the United States and is the 60th animated feature in the Disney Animated Canon. Directed by Byron Howard and Jared Bush, the film was written by Bush and Charise Castro Smith.

Encanto tells the tale of an extraordinary family, the Madrigals, who live hidden in the mountains of Colombia, in a magical house, in a vibrant town, in a wondrous, charmed place called Encanto. The magic of Encanto has blessed every child in the family with a unique gift from super-strength to the power to heal—every child except for Mirabel. But when she discovers that the magic surrounding Encanto is in danger, Mirabel decides that she, the only ordinary Madrigal, might just be her exceptional family’s last hope.[4]

While escaping her home from conquerors, Alma "Abuela" Madrigal loses her husband Pedro, but rescues her three children Julieta, Pepa, and Bruno. Due to a miracle, a candle she held onto is enchanted to protect a small village with mountains hidden away in an "Encanto". Abuela's new house grows and imbues the Family Madrigal with special gifts. Bruno, who received the ability to see the future, runs away due to the negative predictions while Julieta's youngest daughter Mirabel does not get one. On the day Antonio, Pepa's youngest son, is to receive a gift, Mirabel gives him the courage to go through with the ceremony. Antonio gets the ability to speak with animals and the whole town celebrates while Mirabel is happy for him, though still saddened that she did not get one.

Mirabel suddenly sees cracks forming around the house and the candle flickering, but when she tells everyone, everything is back to normal, leading the family to think that she is anxious. She later learns that Abuela does indeed believe her and decides to save the magic. After asking her cousin Dolores, who can hear everything, she confronts her older sister Luisa, who has super strength. Mirabel gets her to confess that she feels overburdened by the family and reveals that when she saw the cracks, she felt weaker and to go to Bruno's room. Mirabel enters to see that it is a giant sand-filled cave and discovers a vision that supposedly shows Mirabel being the cause of the house cracking apart. Upon leaving, Luisa reveals that her strength is fading and Abuela tells Mirabel not to talk to anyone especially since her perfect older sister Isabela, who can make flowers appear, is to get engaged to Mariano, a local man.

During dinner that night, Dolores overhears Mirabel talking with her father about Bruno's prediction. The dinner and the proposal are ruined as the house once again forms cracks and everyone's powers begin to falter while Isabela berates Mirabel. Mirabel discovers a hidden passage in the walls and finds Bruno, who did not run away and instead hid as he still cares about his family. Mirabel convinces him to hold another prediction and, with Antonio's help, he manages to find a solution that involves Mirabel having to hug it out with Isabela. Mirabel goes to apologize but instead learns that not only does Isabela feel burdened by being perfect, but that she did not want to marry Mariano in the first place. This causes her to make more exotic plants and both sisters make up, seemingly fixing the house.

Abuela discovers what has been happening and berates Mirabel for "ruining" their family. Mirabel snaps back at her, accusing her of seeing her as a disappointment and being the true cause of the magic disappearing. The house finally falls apart as the Madrigals are all left devastated. Mirabel runs away to the river where Pedro perished as Abuela finds her. Abuela admits that everything was indeed her fault as she forgot that what made everyone special was that they were a family and they hug. With Bruno in tow, the Madrigals return to fix the house with the entire village pitching in to help. After completing the house, Mirabel adds the doorknob as the house springs to life and the magic returns.

In 2016, Lin-Manuel Miranda was offered by then-chief creative officer John Lasseter an animated film alongside Zootopia director Byron Howard.[5] By November 2016, Miranda said that he and Howard had begun early work on the project, though Miranda noted that it could take years for the project to come to fruition.[5]

In January 2020, it was reported that Howard and Zootopia co-director Jared Bush were working on a film centered on a Latino family.[1] Zootopia producer Clark Spencer will produce the film alongside Yvett Merino Flores, while Bush will co-write the film's screenplay alongside Charise Castro Smith.[1]

In June 2020, the film was reported to have the working title Encanto, and was confirmed to be the project Miranda and Howard were working on since 2016, with Miranda writing songs for the film. It was also reported that the film would center on a magical Brazilian family. However, in June 22, 2020, Miranda stated that the film would be set in Colombia.[4] He also revealed that he had started working on the film's songs.[4] It was also reported that Castro Smith would co-direct the film.[2]

By June 2020, Lin-Manuel Miranda had begun writing the film's music, which will have eight original songs in both Spanish and English.[4] On September 8, 2021, Germaine Franco, co-composer of the songs from Coco, began to score the film.

The review aggregator website Rotten Tomatoes reported a 93% approval rating with an average rating of 7.70/10, based on 110 reviews. The site's critical consensus reads, "Encanto's setting and cultural perspective are new for Disney, but the end result is the same -- enchanting, beautifully animated fun for the whole family."[6] Metacritic reports a score of 75 out of 100 based on 33 critic reviews, indicating "generally favorable reviews".[7] 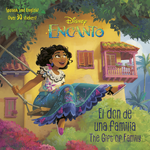 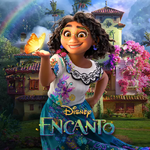 What is an Encanto? - Disney's Encanto - Only In Theaters November 24-2

Disney's Encanto - The Music of Encanto-2