June 16, 2016[1]
Enchanted Storybook Castle is the centerpiece castle of Shanghai Disneyland Park, which opened in June 2016. The castle is the first to represent all of the Disney Princesses, including Anna and Elsa from Frozen, in contrast to previous castles. It is also the tallest Disney castle ever built, standing at approximately 197 ft (60 m) tall.

Being the largest, tallest Disney castle ever constructed, Enchanted Storybook Castle houses a variety of functional facilities--including a walk-through attraction, a restaurant, a makeover boutique, an elaborate stage, and a boat ride that goes underneath the main level.

In the main hall of the castle are mosaics depicting four Disney Princesses, representing the four seasons. With The Princess and the Frog representing Spring, Tangled representing Summer, Brave for Autumn, and Frozen for Winter. In the center, a golden chandelier cascades down from a regal blue ceiling shaped like a star that resembles a starry night sky. This is also the first castle in a Disney Park to have multiple main entrances from different sides, with elaborate walkways that all meet at the center rotunda.

During the designing phase, modern technologies such as 3D computer modeling had to be applied to design and break down the constructional steps for the team. Adding to its gigantic size, the castle is actually built on an elevated platform and can be seen miles away from the park. The platform itself is in fact a gigantic building that houses the boat ride that goes underneath the castle as well as behind the scene facilities.

Shanghai Disneyland is also the very first Disney Park to refine the logistics around the castle during the nightly fireworks shows. The launchpads for pyrotechnics from the castle are built to the front, while castle itself is isolated from the rest of Fantasyland’s attractions, thus enabling all the rides in the back area that would normally close down in other Disney Parks for the fireworks shows remain fully operational.

The castle from afar 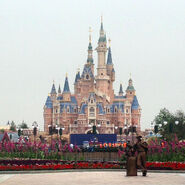 Enchanted Storybook Castle in front of the live-action Mulan