Enchanted Tale of Beauty and the Beast

It was originally scheduled to open on April 15, 2020,[2] but the opening was postponed indefinitely following the closure of the park due to the COVID-19 pandemic. In mid-September 2020, the attraction was confirmed to be opening on September 28, 2020.[3] The ride soft-opened a week earlier on September 21, 2020[4] along with The Happy Ride with Baymax.

An Audio-Animatronics show based on Beauty and the Beast was supposed to open at Disneyland Park (Paris) in the early to mid-1990s in its Fantasyland on the hillside across from the current location of Pizzeria Bella Notte. The ride would have had two contrasting sides; one side, the entrance to the ride, would have been dark, foreboding and mysterious, surrounded by crooked black trees – just like the Beast’s castle during the curse, while the other side, the exit, would be light, ornate and fairytale-esque, showing the castle after the curse is lifted.

The attraction would have been an animatronic show formatted similarly to Walt Disney's Enchanted Tiki Room. After a preshow viewed as animated stain glass windows, a technology that would later be used at Tokyo DisneySea’s Tower of Terror, guests would have entered a similarly round room, albeit larger than the Tiki Room. Themed as a room in the Beast’s Castle, guests would have sat on three sides of the room looking onto a grand staircase, doorway, fireplace and table.

From here, the guests would witness Belle’s experience in her prison castle, with a real-life performer portraying Belle as she interacts with animatronic recreations of Lumiere, Cogsworth, and Mrs. Potts.

The most spectacular of the scenes would of course have been the ‘Be Our Guest’ segment. As the catchy music played and the dazzling lights lit up the room, guests would be surrounded by action in the same way as the Enchanted Tiki Room – only instead of Tiki heads and flowers, it would be twirling plates, singling candlesticks and dancing cutlery that would have surrounded the guests. Mrs. Potts would have whirled her way around the floorspace on a trolley, while a spinning chandelier would descend from the ceiling and a giant, delicious looking cake would rise from the floor.

The finale of the show would involve the appearance of a giant animatronic recreation of the Beast – to be the largest animatronic Imagineering had constructed (although it has since been surpassed). Belle would have chosen a lucky child from the audience to present a rose to the Beast, who, with a single tear falling from his eye, would remember to love again, lifting the curse. With flashing lights, the Beast would descend beneath the stage (just like the fountain at the Tiki Room), to be replaced by a live actor portraying the Prince.

However, when Disneyland Paris began to experience financial problems, all of the expansion plans were dropped and replaced with cheaper additions like le Pays des Contes de Fées, Beast's Castle and the Village, which could provide a larger capacity at a cheaper cost.

Enchanted Tale of Beauty and the Beast retells the story of the film strictly through the lens of events taking place within the enchanted castle. Passing over the fog-filled gorge across the bridge into the castle courtyard, the queue takes guests through several rooms, passing the enchanted objects in a non-active state. Lumiere and Cogsworth can be seen on a fireplace mantel, Mrs. Potts and Chip (who can occasionally be seen moving) sit on a tea table in the den.

After passing through an armory hall, guests enter the pre-show room at the Main Foyer. A stained glass image of the Prince comes to life as a narrator tells the story of the Beast's enchantment. As the story ends, an animatronic of the Beast emerges from a balcony on the right gazing at the Enchanted Rose while Belle comes in from the left balcony holding a lantern, asking the Beast to come into the light. After Belle is frightened by the Beast's appearance and leaves the room, the Beast looks lonely and the doors open into the queue for the loading area.

As guests pass through the hallway, Lumiere and Cogsworth can be seen reacting to the shadows of the Beast's outbursts towards Belle when she refuses to come to dinner. Making their way towards the kitchen past a dishwashing area, Chip can be seen talking to his mother in shadow behind a cloth. Entering the loading area and going past Chef Bouche, guests board the ride vehicles, taking the form of enchanted serving dishes that dance along to the music of the show scenes.

The attraction begins with "Be Our Guest", with Lumiere appearing from a mantel to conduct our dishes to dance through the song. As we move around the room, watching animated dishes dancing in the cases, the dining room table acquires more elements as the song builds to its finale. We then move to the snow-covered gardens outside the castle for "Something There", with animatronics of Belle, Phillipe and Beast out in the winter cold. As we move into the next room for the ending of the song with the enchanted objects commenting on the romance, with Belle and Beast in their ballroom attire, the happy moment is quickly interrupted by the arrival of Gaston's mob, seen as shadows through the window. As we escape, we pass the Wardrobe trying to barricade a door where torches and pitchforks can be seen popping up through the top. A strike of lightning can be heard as we pass the last petal of the enchanted rose falling and see Belle mourning the dying Beast. Through an elaborate Pepper's ghost effect, the figure of the Beast transforms back into the Prince as the curse is lifted and the castle returns to its original self. The finale of the attraction takes us into the The Ballroom to waltz around Belle and the Prince on a small central stage, with the human forms of the servants looking on. Moving into the unload area, the vehicles pass a restored rose on a fountain with the stained glass image from the film's ending hanging behind it.

"I thought I told you to come down to dinner!"

Belle and Beast animatronics being programmed

Belle and Philippe animatronics being programmed 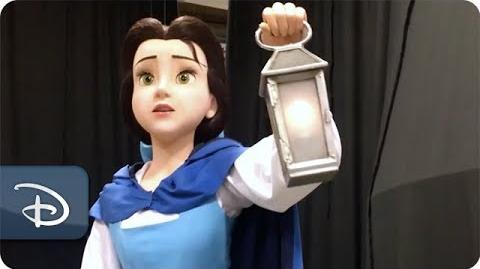