Enchanted Tales with Belle is a live interactive show located in Fantasyland at Magic Kingdom. The new version opened for previews on November 19, 2012 before officially opening on December 6, 2012.[2][3] The attraction is also featured at Shanghai Disneyland, where it is instead known as Bai Ling Storytime.

Pre-show: Walking up to Belle's Cottage certainly sets the stage, so to speak, for what is to come. The paths are lined with pieces and parts that are easy to imagine came from Maurice's workshop filled with his many inventions. In the distance, the top of Beast's majestic castle presides over the French town and its people. Guests enter the main room of Maurice's cottage and immediately will recognize the occupants of the dwelling from the stacks of books and portraits, including one of a young Belle with her mother. From there, they are admitted to Maurice's workshop in smaller groups of about 45 people.This area has even more detailed theming, giving guests plenty to study while they wait in front of the magic mirror. Maurice's drawing board and sketches are evident, his tools are scattered throughout the space, and his creations are perched on shelves and hanging from the ceiling. A gift from Beast to Maurice so he could visit his daughter whenever he desired, the magic mirror is transformed before visitors' eyes into a portal leading to Beast's castle.

Guests enter a room where Wardrobe interacts with the group, with the help of a cast member. They explain that guests will surprise Belle with a re-enactment of "Beauty and The Beast." Volunteers are assigned parts and handed props, and then everyone is admitted to the Library in Beast's Castle. Be prepared to be amazed by the talkative Lumiere, who helps direct the group to their places in the library. The small candelabra atop the fireplace is big on personality during the show.

The show: Lights are dimmed to surprise Belle when she enters the room, and then the production begins as cast members help the guest actors deliver their simple lines. The experience is interactive for the audience, as well, when guests are invited to howl with the wind, shiver in the dungeon and gallop with a horse. One great thing about this experience is that there are enough parts for every child and many adults in the room, so no one will be left out. It concludes with participants having their photos taken with Belle before the princess leads the actors around the room to the peppy song, "Be Our Guest." Each participant also receives a special bookmark "in appreciation to mark the occasion."

Shanghai Disneyland also features an almost identical attraction, named simply Bai Ling Storytime, one troupe of players shares the beloved story of “Beauty and the Beast” with puppetry that premiered in Festival Forest. Using the name of “Bai Ling” to give an immediate feeling of music and beauty, the storytellers combine western and Chinese theatrical humor, as well as good messages for parents to share with children. Similar to Storytime with Belle, but the story is told and sung entirely in Mandarin.

Portrait of Belle and her mother featured in the queue. 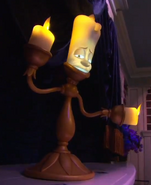