The Akamai (Tales from Adventureland)

The populace of birds includes about eight macaws, twelve toucans, six cockatoos, nine forktails and an assortment of other tropical birds.

The leaders of the Tiki Room are four macaws consisting of José, Michael, Pierre, and Fritz. Japan's alternate versions have also introduced two new sets of macaw emcees, with Get the Fever! featuring Danno, Scats, Buddy, and Lava (a female) and Aloha e Komo Mai featuring Hanoli, Manu, Mahina, and Waha Nui. There is also a bird of note named Rosita, a member of the Showgirl Birds group who is absent from the original ride and whose absence is often alluded to. A bird called Juan appeared as a barker for the Tropical Serenade in the Magic Kingdom, similarly to another talking barker parrot in the nearby attraction of Pirates of the Caribbean.

When developing the Enchanted Tiki Room, Walt Disney originally wanted all of the Tiki Room birds to be real macaws in cages at a restaurant. For a variety of reasons this plan was opted out but it did inspire the birds in the final attraction.

The tiki-room bird Rosita appears in this attraction where she is waiting for a Jungle Navigation Company boat to take her to her next show. She makes jokes and music for guests dining at the locale and passing by on the Jungle Cruise where she is also visible.

Due to its vicinity to the Tiki Room, several allusions to the birds appear in this attraction. Bird-houses for the showgirl birds can be seen above the building with their names listed on it. A cane and hat homaging Juan can be seen in Rosita's possession. By the docks of the Tropical Hideaway, a package addressed to José can be seen.

In one mission of this interactive game, guests must photograph to birds for a talent-agency.

In this film, the white cockatoo Rosita appears as a pet to Nilo Nemolato.

It's a Small World: The Animated Series

José, Fritz, Michael and Pierre made cameos in this series.

The Tiki Room birds can be found in the area usually occupied by the load-area for the Tiki Room in Adventureland. Using a baton, the player can conduct them to sing their song.

The tiki room birds appear as decorations within this video-game.

In Disney Kingdoms: Enchanted Tiki Room, the birds, and flowers gaining an ability to speak human languages is the result of the magic of the Tiki Room itself and this can extend to any animal that enters the room. A migratory bird who finds herself given speech is soon alienated from the rest of their flock and ends up taking part in a rare ceremony with the Tiki Gods to have it undone, though her recounting of the event just before the magic fully takes away her voice is interrupted by squawks. The Orange Bird of the Sunshine Tree Terrace is affiliated with them in this comic.

In Tales from Adventureland: The Keymaster's Quest, the birds of the Tiki Room are rare magical breeds known as the Akamai that are capable of human speech and possess great intelligence for birds. The Tiki Room was built by the menehune as a safe haven for them and the Jungle Exploration Society has committed to further protecting them through constructing an outdoor security system of animated Tiki God sculptures to frighten away superstitious poachers. 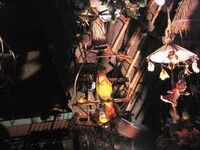 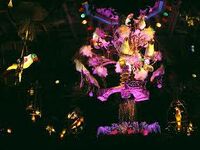