End of the World

End of the World

The "End of the World" is a World from the first Kingdom Hearts game. It is the last location to open in the game, upon locking the keyhole in Hollow Bastion.

End of the World is a by-product of the Heartless' destructive nature. Although End of the World is the last world, the Heartless are not very numerous as compared to Hollow Bastion, but they are very powerful. Upon taking a world's heart, a tiny fragment of what is left of that world is sent drifting through the void of space until it eventually meets and merges with End of the World. It is, in essence, a Heartless of the destroyed worlds, as well as the location of Kingdom Hearts for worlds' hearts. In nature, it can be seen as the opposite of The World That Never Was, which is a similar artificial "Nobody" world without its own heart.

The theme music for End of the World is "End of the World" and the battle theme is "Fragments of Sorrow". Both are arrangements of different segments of "Dive Into the Heart (Destati)", the music used during the Awakening.

After sealing the Final Keyhole at Hollow Bastion, Sora, Donald, and Goofy arrive at the End of the World. Goofy takes note of its composite-world nature, and Sora states that all of the worlds would be restored if they managed to defeat Ansem, Seeker of Darkness, but wonders what would happen to the world itself and them by extension. Goofy says that, as a "Heartless world", it would just disappear, but assures them that, even if that did happen, they would not meet the same fate. Sora takes out Kairi's lucky charm, and remembers his promise to return it.

After fighting through several legions of Heartless and the World Terminus, Sora, Donald, and Goofy run into the giant demon Chernabog and manage to defeat him after a lengthy battle. Afterwards, they descend into the crater of Bald Mountain and press onwards. The group reaches the Final Rest area where a door appears like the one that was in the Awakening earlier in the game. Through the door, they come to the remnants of Sora's homeworld, the Destiny Islands, which soon takes on a much darker appearance.

Ansem appears in the form of Riku, and states that Riku was desperate to escape the islands by any cost, and then takes on his own form. Sora calls out to Riku, but Ansem informs him that any effort to reach him is futile. The villain goes on to explain that all worlds and hearts begin and end in darkness; thus, darkness is the true essence of a heart. Sora denies this, stating that, while hearts may be weak and sometimes even give in, deep down, there is a light that never goes out. Unimpressed, Ansem says, "So you've come this far, and still you understand nothing" (mirroring his words to Sora at the beginning of the game), and engages in battle with the trio.

Sora comes out victorious, and then the mountains of the islands split open. Ansem escapes into the opening with Sora, Donald, and Goofy in hot pursuit, but only Sora is able to get past a preset barrier. After defeating another Darkside and Ansem, the latter uses his power to send himself and his foes to a dark void.

Badly injured, Ansem opens the Door to Darkness, informs Sora that not even the Keyblade can seal the door, and pines for Kingdom Hearts to fill him with the power of darkness. Sora shouts that Kingdom Hearts is, in fact, light, which proves to be correct; the light of Kingdom Hearts shines out of the door and hits Ansem full force, destroying him.

However, the threat is not over; several thousand Heartless lie in wait behind the door. Sora, Donald, and Goofy attempt to close it, but even with help from the restored Riku, their efforts are futile. Just when things appear to be over, King Mickey arrives with a golden Keyblade, and Sora, Riku, Donald, and Goofy manage to close the door. Before it does, Mickey assures them that there will always be a door to light; thus, they will be able to find their way back. Riku asks Sora to take care of Kairi, and Sora and Mickey use their respective Keyblades to seal the Door to Darkness forever.

Soon afterwards, Kairi appears, and Sora runs off to talk to her. However, the worlds are beginning to restore themselves. Sora promises to return to Kairi when his obligations are done just as the End of the World breaks apart; Kairi is sent back to the Destiny Islands alone, while Sora, Donald, and Goofy end up on the pathway to Castle Oblivion, where they resolve to find Riku and King Mickey, though they are unsure of where to start looking.

End of the World only appears when Roxas was dreaming about Sora's memories. Its name is never mentioned, and is not playable. The area where Sora, Donald, and Goofy is also briefly shown later, when King Mickey explains the truth about Ansem.

Gate to the Dark 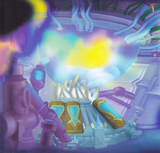