It's a hot day in Doc's neighborhood as Donny's favorite toy Lenny the fire truck runs out of water, Donny thinks that Lenny is broken for good so Donny puts him in a pile of broken toys. Doc, Stuffy & Lambie plan to help Donny by fixing Lenny as he keeps running out of water.

Differences Between Book from Episode 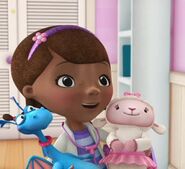