Still standing
England is a country that is part of the United Kingdom in Europe. It shares land borders with Scotland to the north, and Wales to the west; the Irish Sea is to the northwest, the Celtic Sea to the southwest, while the North Sea lies east, and the English Channel to the south, separating it from continental Europe. Most of England comprises the central and southern part of the island of Great Britain in the North Atlantic. The country also includes over 100 smaller islands, such as the Isles of Scilly and the Isle of Wight.

The country has been featured in multiple Disney properties. The exact time period shown depends on the film. The most commonly shown location within England has been the capital city of London, though other areas have appeared too.

Actors/Actresses and Crew born in England 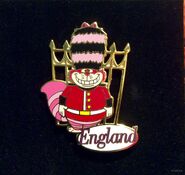