Epic Mickey: Power of Illusion
Epic Mickey 2: The Power of Two (originally titled Epic Mickey: The Power of 2 in Europe) is a sequel to the video game Epic Mickey. It was announced on August 27, 2011, when Disney marketing polls revealed four potential covers and some working titles. The game features co-op, with Mickey and Oswald. The game was officially announced for a Fall 2012 release window on December 29, 2011 and it was announced for multiple consoles and PC. Unlike the first game, Epic Mickey 2: The Power of Two features full voice-acting and original songs written by Jim Dooley and Mike Himelstein. The PC version was originally cancelled. (However, on October 6, 2014, Epic Mickey 2 was made available on Steam.)

The game is set some time after the original Epic Mickey. The Mad Doctor, whom Mickey defeated in the first game, mysteriously returns to the Wasteland, despite having been supposedly blown up in the first game. He claims to have realized the error of his ways and offers to work with Oswald the Lucky Rabbit and the other residents of Wasteland to repair the damage recently caused by earthquakes in order to make amends. Giving him the benefit of the doubt, Oswald agrees. However, not long after accepting the Mad Doctor's help, Wasteland begins to suffer even more damage than before. Becoming suspicious that the Mad Doctor is not keeping his part of the bargain, Gremlin Gus, Oswald's friend and adviser, and Ortensia, Oswald's girlfriend, decide to contact Mickey Mouse, who saved Wasteland in the first game, to ask for his help. Gus is able to contact Mickey using Mickey's television and tells Mickey in a very panicked voice that there is trouble in Wasteland. Confused, Mickey then jumps into the TV, where he has to get his paint brush back. Armed with the paintbrush, Mickey then re-paints Wasteland and jumps right in. With Gus' help, Mickey returns to Wasteland to assist in uncovering the truth behind the Mad Doctor's supposed reformation, teaming up with Oswald along the way.

The two later discover that the Mad Doctor has been using his offer of help as a premise to release his new creations, "Blotworx" (a mixture of the Blotlings and Beetleworx from the original Epic Mickey), into the Wasteland. Realizing his mistake, Oswald proceeds to assist Mickey in taking down the Mad Doctor once again.

There is also a boss battle against Elliott the Dragon which is actually a parade float from the Main Street Electrical Parade. In this battle, just like the first game you have two options: to either thin or paint it.

In Epic Mickey 2: The Power of Two, Mickey will be able to use his paintbrush from the first game, and can still use paint and thinner. Oswald is armed with a remote control that has the power to command electricity. Oswald's other powers are the use of his ears as a helicopter to float and to remove his arm and use it as a boomerang to get items or hit things. The game will be like a musical in which songs and music will change based on whether gamers prompt Mickey to be well-mannered or mischievous. Oswald is controlled by either another player or running as an NPC. Also, the camera controls are changed.

During a survey, a question was asked. It said this:

In issue #276 of Nintendo Power Magazine, the game was hinted at in the end of the issue as they said that in the next issue, they would feature a look at "a top-secret title that promises to make your head spin" (Referring to Oswald's "Helicopter Ears"). It was eventually revealed that Epic Mickey 2: The Power of Two actually was the "Secret" Project.

On March 21, 2012, the game and its official title was confirmed by Warren Spector and acclaimed IGN game unit. It has been confirmed that Ortensia, Gremlin Gus, the Mad Doctor, Pete, Animatronic Goofy, Yen Sid, and the Magic Brooms from Fantasia will appear. Frontierland and some other new worlds would also be added to the Wasteland.

In the GameTrailers TV episode that aired March 23, 2012, all new gameplay and story elements were premiered. According to Spector, this story revolves around the return of the Mad Doctor who claims he's reformed and wants to rejoin Oswald's forces. Oswald, overjoyed with the return of his friend, accepts him with open arms. However, the citizens of the Wasteland feel reluctant to the whole thing. To see if the Doctor is legit, they call on Mickey. Strangely, earthquakes begin to occur all over Wasteland, leaving Mickey to feel a lot more suspicious about the Doctor. Also revealed were new areas to be visited including Mickey's room in the real Disney world and Yen Sid's studies which were only seen in the previous game's opening and ending cinematics. The returning areas of Wasteland such as Mean Street and Ostown will be revamped.

As said before, the game features full voice acting with Oswald being voiced by Disney veteran Frank Welker who performed Oswald's grunts and sound effects in the first game. The original game's narrator Yen Sid will be voiced by Mike Himelstein who is also writing the lyrics for the game's musical numbers. The total amount of songs that will be in the game is currently unknown. However, according to Spector, there will be "at least five songs". There is also a new way to travel through Wasteland alongside the 2D cartoon portals. Players now travel underground where forgotten Disney memorabilia of classic characters like Chip and Dale and Toby Tortoise are stored.

A new army has risen in the Wastelands too, a curious hybrid of Blotlings and Beetleworx known as Blotworx. How exactly this new species came about is all part of the mystery surrounding the sequel's story.

A confirmed boss was discovered when Warren Spector said that the first boss will be an animatronic version of Elliot the Dragon from Pete's Dragon, based on the Ellliot float from the Main Street Electrical Parade. The robot has a Blotling controlling it, making it a Blotworx.

By the end of 2012, Epic Mickey 2 sold 529,000 copies in the United States. By the end of 2010, its predecessor had sold at least 1.3 million. In a recent interview, Warren Spector stated that he was 'in doubt' about the future of the series. Despite heavy advertising and due to gameplay criticism, the game barely sold a quarter of the copies the original did, making it a commercial bomb (its sales were scoped at around 2 million), despite being available on multiple platforms. Following these financial losses, Disney made an official statement on January 29, 2013 that Junction Point Studios was to be closed in order to direct resources to other projects. It is revealed that Disney still owns the Epic Mickey IP, but has no plan for the series. In 2016, concept art was leaked of a cancelled kart racer based on the Epic Mickey franchise, named Epic Mickey Racers, which was to include a number of other playable characters from Disney's legacy including Scrooge McDuck and Cruella De Vil as well as Mickey Mouse and Oswald the Rabbit.[1]

Promotional art of Mickey and Oswald teaming up to save the Wasteland. 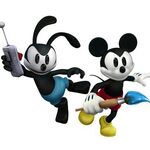 Mickey and Oswald attacking a blotling.

Oswald with his remote.

Mickey and Oswald with their "Weapons".

The turbines in the Underground beneath Mean Street.

Ostown, as it appears in the game.

Artwork for the Disney Gulch