Signor Vespa (by Alberto)
Catfish (by Giulia and Luca)

Five-time champion of the Portorosso Cup

Sea monsters, anyone who damages or looks at his Vespa, Giulia Marcovaldo, lack of attention, losing, defeats, Luca Paguro, Alberto Scorfano, being humiliated

Ercole Visconti is the allegedly 16-year-old bully of the small Italian town of Portorosso and repeat champion of the town's Portorosso Cup race, despite how many people point out he is too old for it. He's a Vespa-owning, pompadoured blowhard who believes that everyone loves him and enjoys watching him eat sandwiches. He has two worshipful followers, Ciccio and Guido, who accompany him everywhere, ready to do his bidding.[1]

Ercole is a narcissistic bully, believing himself to be the best person in Portorosso and bullying others as a way to brag about his self-proclaimed success and as a show of strength. He cares deeply for his reputation, going to any length to keep his track record as winner of the Portorosso Cup. His ego causes him to delusionally believe that everyone in Portorosso adores and respects him when in fact nearly everyone despises him, even the local priest.

His approach to bullying can be physical, as seen when he tried to dunk Luca after he accidentally almost harmed his Vespa, and when he punched Alberto when he tried to defend his friend. He is also a bad boss, abusing his underlings to the point of them eventually rebelling against him and throwing him into the fountain.

Ercole is also greedy, to the point of going to hunt for a sea monster upon hearing that there's a reward for capturing one. As well as greedy and a bully, he can also be murderous when he attempted to kill Alberto and Luca for both the reward and to win the race, in spite of being completely aware that they are as sentient as he is, revealing himself to be a self-centered sociopath.

Additionally, Ercole is materialistic, displaying anger once Luca accidentally harming his Vespa, and sadness when his sweater was wet due to being thrown into the fountain with him. He is also shown to be very immature, as seen with his self-centered ways of bullying and constant entering of the Portorosso Cup, even though many have pointed out that Ercole's getting too old to compete in the race.

In the Italian seaside town of Portorosso, Ercole has gained a notorious reputation as the local bully, as a result of having won the town's annual Portorosso Cup five times in a row, and constantly brags about it to everyone as well as constantly flaunting himself by loudly riding his Vespa through the town square and streets whilst blaring loud music from a radio. The children of Portorosso fear and hate him for his bullying, whilst the adults see him as an annoying nuisance. When he arrives into town on a shiny red Vespa with his two goons, Ciccio and Guido, carrying a sub for him, Luca and Alberto, having arrived to Portorosso to flee from Luca's parents, accidentally earn his ire after Luca kicks a ball onto Ercole's Vespa, making it fall over (with Ciccio saving it from getting any major scratches). Upon learning that Luca was responsible, Ercole decides to mock him before threatening to dunk his face in the fountain, exposing him as a sea monster. Luckily, a girl named Giulia, who loathes Ercole for costing her the chance of winning the Portorosso Cup, saves Luca and Alberto just in time and takes them away, where Ercole eggs on them one last time by telling to go start a club "for losers".

Later, when Luca, Alberto, and Giulia earn enough funds to buy their participation in the race, Ercole, Ciccio, and Guido arrives to sign up for the race as well. After signing up, Ercole sees the three heroes signing up as well, and orders Ciccio to steal their entry money. As Luca insults him by calling him a catfish (a bottom-feeder with sad little whiskers), Ercole decides to fight back by allowing them to enter the race with the intention of destroying them.

During the days leading to the race, Ercole soon becomes suspicious of Luca and Alberto, as he discovers signs that they might be sea monsters, let alone that they are becoming better at their training. During the final day of training, Luca and Alberto get into an argument when the former suggests going to Giulia's school in Genova to learn more. When Giulia catches up, Alberto decides to expose himself in front of Giulia, expecting Luca to do the same, but Luca, out of panic, calls Alberto out. This one act, coupled by Giulia's screaming, catches the attention of Ercole, who tries to capture Alberto with the intention of winning the prize money.

The next day, Luca, Giulia and Ercole are ready to begin to Portorosso Cup. Before the swimming portion, Ercole pours a whole container of olive oil onto Ciccio to make his more streamlined, revealing his cheating tricks. The race begins but Ciccio struggles to complete his portion as fish are nipping as his body, allowing Giulia and Luca to complete the first leg. When Ciccio finally finishes the leg, Ercole forces Guido to the table to complete the second leg, which involves eating a whole plate of pasta. When Giulia manages to complete her plate, Ercole impatiently shoves the remaining pasta into Guido's mouth (much to the dismay of another participant, as she points out he's cheating), and quickly tags himself in to catch up with Giulia. At the same time, Luca manages to complete his plate, and gets on his bike to finish the final leg.

As the bikers ride up the hill, Ercole manages to beat out Giulia, but Luca arrives and passes him up. Unfortunately, at this time, it begins to rain, jeopardizing Luca's chances of winning the race, as the water would expose him as a sea monster. However, Alberto, having a change of heart, quickly catches up to Luca. Ercole decides to sideswipe Alberto, causing him to drop his umbrella and expose his sea monster identity. When Ercole sees the monster Alberto is, he quickly captures him, but Luca, wanting to save his friend, decides to expose his true self and rescues Alberto. As they race down the hill, Ercole becomes hellbent on killing the two.

When Luca, Alberto, Giulia and Ercole get close to the end, Giulia decides to crash her bike into Ercole's to stop him from harming her friends, causing both of them to fall over and injure themselves. Concerned for Giulia's safety, Luca and Alberto go help her up, but this results in the townspeople to surround them, with the fishermen ready to kill them, alongside a deranged Ercole, who tries to rally the townsfolk that they are evil because they are monsters. However, Luca puts his foot down and tells the bully off, saying that just because they're monsters doesn't mean they should be the subject of shunning. Massimo, having grown fond of the two boys, and because they were looking after his daughter, tells the townsfolk that they are the winners of the Portorosso Cup on a technicality (their bike crossed the finish line). However, Ercole refuses to accept this, and once again tries to convince everyone to kill them because they are monsters, but when the townsfolk realize that they're harmless (and not wanting to get on the wrong side of Massimo), they decide to step down and leave them be. After Luca, Alberto, and Giulia break his harpoon, Ercole demands Ciccio and Guido to give him another one, but the two, having had enough of his constant mistreatment, proceed to toss him into the fountain, shrinking his wool sweater and finally ending his winning streak, alongside his reign over Portorosso.

His whereabouts afterwards are unknown, but it can be assumed that because his reign over Portorosso is over, the children no longer fear him and the adults now make sure he doesn't cause any more harm. 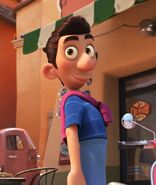 Ercole's first appearance in the movie.

日本語 Português do Brasil
Community content is available under CC-BY-SA unless otherwise noted.