Mary Jacobson
Eric Jacobson is an American puppeteer, who first started working with the Muppets in 1994.

In order to keep the characters of Frank Oz (who was focusing more on directing and other endeavors) alive and visible, Jacobson was selected to take over performing Frank's characters, due to his strong puppeteer talent and extremely similar vocal range.

Since the early 2000s, he was the principal performer of Miss Piggy, Fozzie Bear, Animal, and Sam the Eagle. He was also the performer of Piglet in The Book of Pooh. He also made a guest voice appearance as Dr. Enamel in Big City Greens, which was done in-character as Fozzie himself doing the voice, with online promotions for the episode showing Fozzie in the booth.

Outside of Disney, he is the current primary performer of Grover and Bert on Sesame Street.

Piglet
(The Book of Pooh) 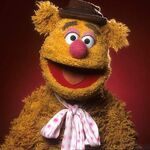 Sam the Eagle
(The Muppets franchise)

Dr. Enamel
(Big City Greens)
Add a photo to this gallery
Retrieved from "https://disney.fandom.com/wiki/Eric_Jacobson?oldid=4381026"
Community content is available under CC-BY-SA unless otherwise noted.