S.H.I.E.L.D. agent;
Keeper of the "Providence" base

Eric Koenig is introduced in "Providence" as the caretaker of the secret S.H.I.E.L.D. base Providence. He is pleased to meet Agent Coulson who has become a legend among the higher-level agents after the events of the Battle of New York. He tells the agents that Director Fury is dead, but tells Coulson in confidence that Fury is still alive.

In "The Only Light in the Darkness", Koenig will not allow Coulson's team to leave Providence base until he has tested the reliability of the members. He puts them all through an orientation involving a lie-detector which he designed to examine 96 variables. He notices fluctuations in Grant Ward's test and points a gun at him. Ward lies his way to passing the test. After Coulson, Simmons, Fitz, and Triplett leave, Eric is left with Ward and Skye. When he is alone with Ward, the HYDRA agent kills him and hides his body in a supply closet.

In "Nothing Personal" his corpse is found by Simmons.

In "Beginning of the End", it is revealed that Billy Koenig, who is identical to Eric, and is there to help Coulson, the new director of S.H.I.E.L.D. 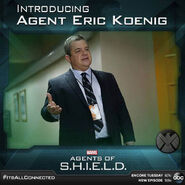