Disney Wiki
Register
Don't have an account?
Sign In
Advertisement
in: People, 1980s births, Honey, I Shrunk the Kids,
and 11 more

Jessica Mallers (m. 2019)
Erica Shukrani Luttrell is a Canadian actress and voice actress, best known for voicing Keesha Franklin on the PBS children's animated television series, The Magic School Bus, from 1994 to 1998, her role as Kara on another PBS television program, Shining Time Station from 1991 to 1993, and her for role as Sapphire on Cartoon Network's Steven Universe.

To date, Luttrell's Disney roles are providing the voices of Candy Barbarian and Queen Glimia on Dave the Barbarian, Shuri in Marvel's Avengers a lioness in the The Lion Guard episode "Lions of the Outlands", Boboka in "Beshte and the Hippo Lanes", and for portraying Jody in the live-action direct-to-video sequel, Honey, We Shrunk Ourselves and Taylor in The Jersey.

Jody
(Honey, We Shrunk Ourselves) 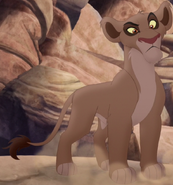