Avengers Assemble
What If...?

Keston John (Avengers Assemble)
Michael B. Jordan (What If...?)

T'Challa (formerly), failure, discrimination, being underestimated, seeing people being oppressed, inaction, isolationism, those who stand in his way, his father's death

T'Challa: "Maybe we can still heal you."
Killmonger: "Why? So you can just lock me up? Nah. Just bury me in the ocean with my ancestors that jumped from the ships. 'Cause they knew death was better than bondage."
―Erik's last words before his death[src]

Erik Killmonger is a Marvel Comics character, who appears as the main antagonist of Black Panther, played by Michael B. Jordan.

He is a ruthless Wakandan warrior, former American black-ops operative, and a terrorist leader. Killmonger's father was once a Wakandan citizen who was punished by Wakanda's former king, T'Chaka, for betraying Wakanda, thus; Killmonger seeks not only vengeance but also to overthrow T'Challa, and conquer Wakanda and the entire world with vibranium to Wakanda's spy network.

To that end, Killmonger has honed his body and mind to the peak, being an expert martial artist, an excellent hand-to-hand combatant, and a genius in a wide variety of fields. He is willing to team up with Ulysses Klaue, as they both have a common enemy in T'Challa.

Erik "Killmonger" Stevens was born many years ago in Oakland, California with the birth name N'Jadaka. His father, N'Jobu, was the prince of Wakanda who was sent to the United States as an undercover agent and would tell N'Jadaka stories about Wakanda, promising the young boy that he would one day take him there, claiming that the sunsets there were the most beautiful in the world.

One night, N'Jobu's brother, T'Chaka tracked N'Jobu to his apartment and confronted his brother when N'Jobu was accused of selling Vibranium to terrorists. After N'Jobu's partner Zuri, revealed to be a spy sent by T'Chaka, confirmed this, T'Chaka decided to take N'Jobu back to Wakanda to face judgement for his crimes; but N'Jobu attempted to shoot Zuri and in self-defense, T'Chaka kills his brother by stabbing him with the claws of his suit. Outside, Erik was playing basketball with his friends and caught sight of T'Chakka and Zuri departing on their ship over his apartment building. Rushing back inside, Erik found his father dead, and was left to mourn his father's death.

Years later, Erik joins the American military forces, where he served as a black ops soldier. Thanks to the military, Erik gains various skills in combat, martial arts, firearms, and knowledge about explosives and psychological warfare. Erik also gains the nickname Killmonger for slaughtering and defeating thousands of enemies. After the army, Killmonger forms a group of criminals with Ulysses Klaue to gain access to Wakanda and vibranium. The two steal a Wakandan weapon made of Vibranium from the Museum of Great Britain. Klaue attempts to sell the weapon to Agent Everett Ross in South Korea. However, T'Challa, along with Okoye and Nakia, intervene on their hunt for Klaue. When the Wakandans finally manage to capture Klaue, Killmonger and his group save the arms dealer from custody. During the short fight, T'Challa notices the Wakandan Royal Ring belonging to N'Jobu around Killmonger's neck.

Once the group is out of range, Killmonger murders his operatives and Klaue; at Wakanda, Killmonger presents Klaue's body to W'Kabi, T'Challa's friend and head of border security. W'Kabi, already disappointed with T'Challa for not managing to bring Klaue to justice for his crimes, brings Killmonger to the King and his council. In front of T'Challa at last, Killmonger begins taunting T'Challa while T'Challa tells Killmonger that the only reason he was still alive was that he knew who Killmonger truly was. Killmonger reveals his true identity in anger when T'Challa orders him to be removed. Killmonger then challenges T'Challa to a duel, which T'Challa accepts.

At the waterfall, Killmonger's experience and training make him an even match with T'Challa, who had his powers stripped to have a fair fight. Taking advantage of T'Challa's mercy, Killmonger gravely wounds T'Challa and almost gives him the finishing blow; however, Zuri stops him, begging Killmonger to take his life and spare T'Challa over his guilt over N'Jobu's death. Killmonger viciously grants Zuri the first half of his request, but he does not oblige for T'Challa— declaring him unfit as both a king and the Black Panther, Killmonger tosses T'Challa over the waterfall. With T'Challa removed, Killmonger ascends as Wakanda's king. At the herb garden, as per the tradition of the king, Erik is given the heart-shaped herb to ingest, enabling him to enter the astral plane and speak to his father's spirit. Although moved to see N'Jobu again, the heartfelt moment does not sway Killmonger from deciding to continue his crusade. Returning to his body, Killmonger orders the garden to be burned.

Now the king of Wakanda, Killmonger prepares a Wakandan army and shipments of Wakandan weapons to operatives around the world to weaponize other people of African descent and fight back against their oppressors. As the ships start to leave, Killmonger sees one of them taken down from T'Challa, marking the Black Panther's return. Killmonger orders W'Kabi and his tribe to take on T'Challa and his allies. Meanwhile, the Dora Milaje turn against Killmonger, having recognized T'Challa as their true leader and Killmonger as a tyrant. Killmonger, utilizing a Black Panther suit called the Golden Jaguar Habit, fights the warriors who are soon aided by Nakia and Shuri.

Soon, most of the Dora Milaje are decommissioned with Killmonger turning his attention to Shuri. Seeing Killmonger about to hurt his sister, T'Challa rushes in and tackles Killmonger, sending the two plummeting into Vibranium mines. The warriors continue their fight until they come close to mag-lev train tracks, where T'Challa has Shuri utilize the train's sonic stabilizers to disrupt the vibranium in his and Killmonger's suits. T'Challa then uses the brief moment of exposure to impale Killmonger with his own spear. Shaken over his defeat by T'Challa's hands, Killmonger musingly reminisces about his father's love for Wakanda's sunsets to T'Challa. As a sign of respect to his foe, T'Challa helps Killmoger to the Great Mound to watch Wakanda's sunset, informing Killmonger that Shuri could heal his wounds and live. Killmonger declines and asks to be buried at sea like his ancestors, seeing it as a better way to die than being imprisoned. With his last breath, Killmonger removes the spear from his body and dies peacefully. After his death, Killmonger's upbringing and final words motivate T'Challa to change Wakanda's policies and make Wakanda share its technologies to help people around the world.

Killmonger returns in the sixth episode of the animated series, voiced by Michael B. Jordan. While he is the same as his original counterpart, this universe is where he rescued Tony Stark from the ambush by the Ten Rings in 2008. 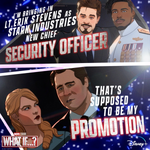 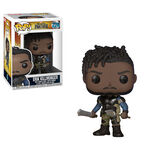 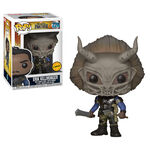 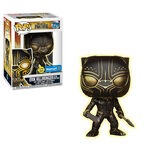 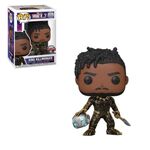