Erin Peyton is part of the supporting cast of the Sixth Saga of the W.I.T.C.H. comic book series.

She once works under Tecla Ibsen as a tool to weaken the friendship of the Guardians, but later changes sides when she discovers the real colors of her superior.

Erin is a young girl with dark complexion and has wavy purplish-blue hair tied to a ponytail.

Because of Tecla's claims about the Guardians and due to her urge to look for her long lost brother Kader, she joins her side and plans on ruining the friendship of the Guardians by using her powers against them.

When Irma offers to share her bedroom with her, she starts to show her real side. In fact, she was just a girl who longs for her brother, whom Irma finds out to have been attacked by Ragorlangs along with the rest of the village where she originated.

After she discovers that Tecla is the one responsible for hurting her loved ones, she switches sides and assists the Guardians (later, with her brother) until she and her brother decide to return to their homeland.

Erin has the ability to manipulate a person's attitude for periods of time just by placing her closed hands one on top of the other. She has managed to use it without fail on the Guardians, and has created commotions between the Guardians with ease.

She can also fire energy beams which she once used to fend off Ragorlang. 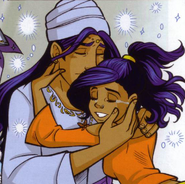