1
Evan Rachel Wood is an American actress, voice actress, fashion model, and singer. She is known for her roles in films such as Petty Persuasion, The Wrestler, Across the Universe, and Ideas of March.

Froznen II producer Peter Del Vecho stated that Wood "has that perfect voice that sits right in between Anna and Elsa's voice, so it sounds naturally like their mother."[2] She takes over the role from Frozen and Frozen II co-director Jennifer Lee, who voiced Queen Iduna in the first film.[3] 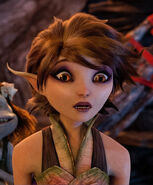 Queen Iduna
(Frozen II)
Add a photo to this gallery

Evan Rachel Wood with Jane Krakowski in May 2008.

Evan Rachel Wood speaks at the Westworld panel at the 2016 Summer TCA Tour.

Evan Rachel Wood at premiere of Frozen II in November 2019.
Add a photo to this gallery

Retrieved from "https://disney.fandom.com/wiki/Evan_Rachel_Wood?oldid=3838886"
Community content is available under CC-BY-SA unless otherwise noted.