Kahekili
Nicole Evangeline Lilly is a Canadian actress and children's book author, who is best known for her role as Kate Austen in the ABC adventure drama series Lost (2004-2010), and as Tauriel in Peter Jackson's The Hobbit trilogy. 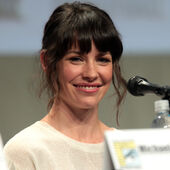 Evangeline Lilly at premiere of Ant-Man in June 2015.

Evangeline Lilly at premiere of Avengers: Infinity War in April 2018.
Add a photo to this gallery

Retrieved from "https://disney.fandom.com/wiki/Evangeline_Lilly?oldid=3883989"
Community content is available under CC-BY-SA unless otherwise noted.