This article is about the original Eve character. For her counterpart in the sequel, see Eve (Life-Size 2).

In her doll form: Plastic black doll with curly brown hair and a red dress
In her human form: Slender black woman with long brown hair, a white shirt and a pink blouse

To experience what it's like to be a human; to be turned back into a doll

Being able to do all the things only humans can do

Is turned back into a doll

"I'm Eve, and you're my special friend."

Eve is a plastic doll and the secondary protagonist of Life-Size.

Eve is a plastic doll in the form of a beautiful young woman, manufactured by Marathon Toys. She has lots of accessories, including outfits appropriate to challenging careers such as law enforcement, medicine, and aerospace, and lives in Sunnyvale, "in the middle of America."

As Casey is preparing to resurrect her mother, Drew stops by to give her the doll for her birthday and uses the hairbrush to brush the doll's hair. With strands from the doll remaining on the brush as Casey utters the incantation, the magic acts on the doll rather than Casey's mother, and Casey wakes up the next morning to find Eve in bed with her in full-size human form (Tyra Banks). Casey is upset by this, but Eve is excited about being human. Over the next few days, Eve buys clothes at the local shopping mall, uses her police training to stop a truck that almost runs Casey over, smells and eats for the first time, tries to do secretarial work, sings her theme song, and almost sets the Stuarts' kitchen on fire. She also helps Casey cope with the loss of her mother. Meanwhile, Casey discovers that she needs the second volume of the magic book to reverse Eve's spell.

By the time the magic book arrives at the local bookstore, Casey has decided she likes Eve. Unfortunately, Eve has been getting homesick. Discouraged by her difficulties in being human and worried about being discontinued by Marathon, Eve decides to undo the spell herself. After buying the book and saying good-bye to Ben at Casey's championship game, she goes to Sunnyvale, a specially decorated room at Marathon headquarters, and recites the incantation. When Casey and Ben arrive, she tearfully bids them farewell and turns back into a doll. Sometime later, with the lessons learned from her experiences in the human world, she becomes a popular toy again.

Eve makes an appearance in the second film when Eve A4114 calls and tells her that Marathon Toys has decided to discontinue the Eve doll. Eve tells Eve A4114 to ensure that she helps Grace and saves the Eve doll from cancellation.

Eve as a doll 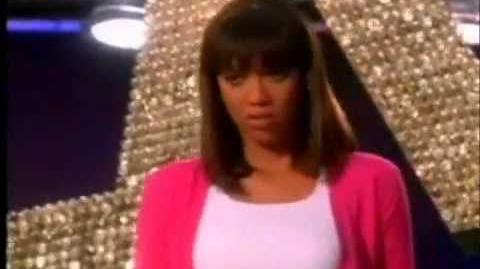 Eve's Transformation
Add a photo to this gallery
Retrieved from "https://disney.fandom.com/wiki/Eve_(Life-Size)?oldid=3392277"
Community content is available under CC-BY-SA unless otherwise noted.