Max Keeble, Dobbs
The Evil Ice Cream Man is a supporting antagonist in Max Keeble's Big Move. He is an ice cream vendor who has a hatred for Max after his mom called the health department and nailed him after Max discovered a cockroach in his snow cone. He has a recent rivalry and hatred for Dobbs as well due to his picking on his (Evil Ice Cream Man's) customers and stealing their income, also referring to the latter as a "capitalist tool". 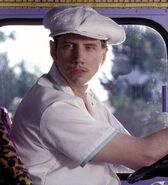 Retrieved from "https://disney.fandom.com/wiki/Evil_Ice_Cream_Man?oldid=3842822"
Community content is available under CC-BY-SA unless otherwise noted.