Evronians are the main antagonists in the PKNA comic series. They are hostile duck-like aliens who want to conquer Earth. Evronians feed with emotions, which turns their victims into mindless slaves called Coolflames, small birds who are distinguishable by the cold blue flame around their heads.

Physically, Evronians mostly resemble ducks, and are about as tall as normal humans. Evronians have purple skin and completely blue eyes without irises, and they have long, flat beaks with teeth, they are also very thin. They look like the creatures designed by H. R. Giger for Alien, but the authors never admitted or denied the xenomorphs as an inspiration source.

Evronians develop from "spores" of unspecified origin (no obvious female Evrons have ever appeared in the series, instead, one issue showed tree-like organisms that formed Evron embryoes inside sack-like spores). When critically injured they have the ability to revert back to their spore state to fully regenerate. They can also survive floating though deep space in their spore state.

The Evronians' most notable characteristic is that they feed on emotions. Although Evronian infants take physical nourishment like humans or other animals do, this is very soon replaced with a more telepathic form of nourishment that does not involve physical matter. Upon encountering a victim, an Evronian shoots it with a special gun, which transfers the victim's emotions to the Evronians. The victim is left mindless and utterly docile. Such drained victims, called "coolflames", are distinguishable by a cold, blue-white flame constantly burning around their heads.

Evronian society is extremely hierarchical, militaristic and merciless, governed by a ruthless, despotic emperor and basically divided into two castes, a caste of warriors and one of scientists. Under the rule of the emperors, the Evronians have conquered an extremely large number of solar systems; the first emperor is said to have expanded his territory so much that he became feared throughout the universe. However, the main stories in the comic focus mostly on the Empire's doings inside the Milky Way. 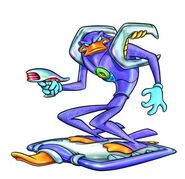 Evronians celebrating Christmas, with a Coolflame as a Christmas tree.
Add a photo to this gallery

Retrieved from "https://disney.fandom.com/wiki/Evronians?oldid=3028328"
Community content is available under CC-BY-SA unless otherwise noted.