Ewoks are the inhabitants of the forest moon of Endor within the Star Wars universe. These creatures resemble bears in appearance.

Return of the Jedi

In the final episode of the original trilogy, the Ewoks make friends with the Rebel Alliance and help them defeat the evil Galactic Empire, which had recently taken their land. They also join the Rebels in rejoicing for their victory afterwards.

The Ewoks reappear in the finale of the film, celebrating the defeat of the Sith Eternal's forces by the Resistance. An older Wicket is seen with his son, an Ewok named Pommet.

They are only seen briefly in the Star Tours attraction, on the large display board in the queue area, where they are described in an advertisement as "the lovable Ewoks" on the "exotic moon of Endor", and are not seen in the ride itself, as the moon is never reached by the StarSpeeder 3000. Their village serves as the exterior queue at the Disney's Hollywood Studios attraction and in the evening, they can be heard telling stories in their treehouses.

Chip and Dale as Ewoks

Bean Bunny as Wicket the Ewok 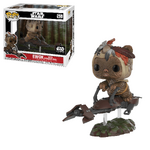 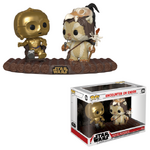