This article is about the weapon used by King Arthur. For other uses, see Sword (disambiguation).

Gargoyles
Excalibur is the name of the mystical sword wielded by King Arthur Pendragon. This one is featured in the animated series Gargoyles.

Excalibur is a magical sword of incredible durability and strength. It may have other mystical properties, but those have yet to be explored and discovered. Excalibur's powers are as yet unknown, although presumably it is an object made by fairy magic. It is undoubtedly a very well-made sword, at the least.

The sword was owned by the Lady of the Lake. Merlin and Pelles placed a spell on part of the Stone of Destiny so that Arthur Pendragon could pull Excalibur from it and become the king.

With Excalibur, Arthur Pendragon was able to unite all of Britain into one country, and created the kingdom of Camelot. However, as many good things do, Camelot was destroyed. Arthur had one of his knights return the sword to the Lady of the Lake, before he was taken to Avalon to sleep within the Hollow Hill. The lady kept it for hundreds of years, eventually moving herself to a lake in Central Park in Manhattan, and the sword to within a stone dragon lying at the center of the Brooklyn Botanical Gardens. Clues to Excalibur's location remained in England as a rookery poem of the London Clan:

When Arthur was awakened in 1995, and began searching for his sword, Avalon sent him to London, and he entered Westminster Abbey, finding that the Stone of Destiny was located there. He also met Griff, who believed Arthur to be a thief of some sort, as he had to break into the Abbey. The gargoyle told Arthur of the rookery poem, and when Arthur recited the first line, the Stone sent him and Griff to the "isle of towers, glass and stone"- namely, Manhattan. "Ebon glass in emerald frame, pure white lilies speak her name" referred to the lily-covered lake in Central Park where the Lady of the Lake now resided. At this point, the rookery trio and Hudson began accompanying them, and Macbeth, seeking Excalibur for himself, pursued them.

After a test of Arthur's leadership skills, the Lady showed them the stone dragon, and Lexington recognized the location as the Brooklyn Botanical Gardens. They traveled there, and Macbeth's mercenaries, Banquo and Fleance, battled the Manhattan gargoyles, while Griff and Arthur raced to the statue. However, Macbeth got there first, and drew what appeared to be the sword. This activated the dragon, which turned out to be a magical construct designed to attack those that took the sword, which Arthur quickly learned was false. He and Griff battled the dragon in the air, and the Once and Future King remembered the fifth line of the poem- Blood red bane in dragon stone- and realized that the sword was within the dragon's red heart. Arthur shattered the heart, and withdrew Excalibur, destroying the dragon.

Arthur set off to locate Merlin, with Griff by his side. Having little luck in actually finding Merlin, he did research on Merlin and on himself, reading Le Morte d'Arthur by Thomas Malory among other books. 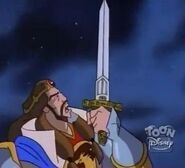 Arthur holding Excalibur
Add a photo to this gallery

Retrieved from "https://disney.fandom.com/wiki/Excalibur?oldid=4401337"
Community content is available under CC-BY-SA unless otherwise noted.