On September 8, 2021, following Walt Disney World's reopening, Disney's Animal Kingdom announced that the original version of the ride would be closed for refurbishment on January 4, 2022 until April 16, 2022, as part of Walt Disney World's 50th anniversary celebration. [1] On April 8, 2022, Disney announced that the ride was originally set to permanently close.[2] However, it was set to reopen on April 16, 2022.

Expedition Everest is often compared to the 1959 Matterhorn Bobsleds roller coaster at Disneyland, which also features a snowy mountain setting and a Yeti figure throughout the ride.

Although moderate in height and length by contemporary roller coaster standards, Expedition Everest is unique for having its trains travel forward and backward as a result of the Yeti's interference with the journey. This is accomplished through two sets of rotating track segments on pivot before and after the backwards segment. In its publicity material, Disney has pointedly described the attraction as a family thrill ride.

Expedition Everest is the tallest of the five artificial mountains at the Walt Disney World Resort, joining Big Thunder Mountain Railroad, Mount Gushmore, Space Mountain, Splash Mountain and Mount Mayday on the list of Disney-built peaks. According to Imagineering, it is Disney's 18th mountain-themed attraction (including clones of Big Thunder Mountain and Space Mountain). If the Expedition Everest mountain were real, it would be ranked fourth on the list of the highest summits in Florida at 320 feet above sea level.

The artificial mountain is not a reproduction of Mount Everest; it is the fictional "forbidden mountain" guarded by the Yeti in the attraction story created by Walt Disney Imagineering. Everest is represented by the barren background peak on the far right, which is meant to suggest it is far in the distance (an example of forced perspective). The attraction's conceit is that the roller coaster is a passenger train offering a speedy route through the Himalayas to the base of Mount Everest.

According to Disney, the attraction occupies 6.2 acres in the park's Asia section and the mountain itself is just shy of 1 acre.

Expedition Everest celebrated its grand opening on April 7, 2006 in ceremonies led by Disney CEO Bob Iger and theme parks chairman Jay Rasulo. The attraction first was announced publicly on April 22, 2003, during an event to celebrate the fifth anniversary of Disney's Animal Kingdom.

Walt Disney Imagineering spend six years researching, designing and building Expedition Everest, including many trips to the Himalayas to collect reference material and observations. The resulting attraction is a fictionalized telling of the legend of the Yeti, using an imaginary setting created with meticulous re-creations of Himalayan (Nepali) architecture, art and cultural traditions.

Riders approach the attraction through the remote village of Serka Zong in the fictional kingdom of Anandapur, which is located in the foothills of the Himalayas, in northern India. Several village buildings that had been used by the Royal Anandapur Tea Company have been repurposed by businesses that send trekkers on various expeditions throughout the Himalayas. "Expedition Everest" is the name of a specific trek arranged by the Himalayan Escapes tour company in Serka Zong.

The entrepreneurs behind Himalayan Escapes, Norbu and Bob, have refurbished a steam train (Darjeeling Ko Rail) that previously had been used to bring harvested tea leaves down from the mountains. It's these trains the Expedition Everest trekkers board on their way to the base camp of Mount Everest, using a shortcut that passes through the "forbidden mountain" thought to be guarded by the Yeti. Among local cultures, the yeti is believed to be a fierce protector of the region's most pristine mountains, valleys and forests, and violently opposes man's encroachment in these areas.

As riders wind their way through the attraction's richly detailed standby queue, half of which is climate controlled, the legend of the yeti is communicated vividly through a gumba, a kind of Himalayan shrine to the Yeti, and a makeshift museum that documents yeti sightings, its significance in Himalayan cultures and a so-called "lost" expedition that ran afoul of the creature in 1982 while attempting to reach Everest through the Forbidden Mountain pass. Near the end of the Yeti museum, two notices hang on the wall — one written by the museum's curator, warning against the railroad expeditions, and another by the owner of the expedition company, stating that the curator's notice "does not represent the opinions or views" of the company. The shorter FASTPASS queue contains a similar but abbreviated storyline. The queues merge in the enclosed train station behind the loading area.

Once the steam trains arrive, the guests board and the expedition begins. The train starts by making a short turn right before ascending a short hill where riders can see Mount Everest. The train then makes a wide left turn and then goes straight, down, up, then makes another left turn before going up another hill much higher than the previous one. As the train ascends the hill, it goes through a small cavern that holds artifacts revolving around the legend of the Yeti and a carving of the Yeti can be seen above the exit. At the top, the riders approach the snow covered Himalayan Mountain where the train then turns left, heads inside the mountain and then turns left again before going up a third hill where the riders discover that the tracks have been torn apart.

As the riders ponder on what happened, they begin to hear the sound of the Yeti's roar and realize that they're in danger. The train then goes backwards into the mountain. For a while, riders are going back at full speed in complete darkness until they discover a passageway out of the mountain, but not before they see the shadow of the Yeti tearing apart another piece of track. Upon seeing this sight, the train moves forward through the exit of the mountain cave where it drops down and banks left before heading into another cave where the roars of the yeti can be heard. After the train comes out, it twists around left until it heads into a third cave where it turns right and riders see the Yeti, who is currently in "B Mode", and then return to the station with the Yeti howling in rage behind them.

One of the attraction's highlights is an encounter with a large Audio-Animatronic Yeti, which Disney claims is one of the largest and most complex figures it has ever built. Joe Rohde, the lead Imagineer for Expedition Everest, has noted that the Yeti featured in the attraction is extremely lifelike and based on extensive research into the cultural legend.

The Yeti itself, as said before, is currently in "B Mode." This means that the animatronic is completely static, with a strobe effect and wind to give the illusion of movement. This was put into place a year after the attraction's opening supposedly due to the animatronic's strength pulling the mountain apart. Others claim that it was due to a crack in the main foundation, while others say it was due to a faulty "sled" on the beast's back. Whatever the reason, it was commonly believed that repairing the Yeti would involve over 12 months of refurbishment, some going as far to say that the whole mountain would have to be cracked open to get to the animatronic. However, upon closer inspection it's worth noting that the Yeti is positioned near the back of the mountain, causing question as to why it would be so difficult to repair. Rumors have been spreading that the the Yeti could easily be fixed, but Disney would not want to spend money on something that is already considered satisfactory. The Yeti can be seen in the original "A Mode" with the lights on here. There are no released nor current plans to repair the animatronic.

In 2005, Disney, Discovery Networks and Conservation International conducted real-life expeditions to Nepal as part of the promotion for Expedition Everest. The purpose was to conduct scientific and cultural research in remote areas of the Himalayas where the yeti legend exists. Participants included scientists from Conservation International and Disney's Animal Kingdom, as well as Rohde.

The expeditions — as well as the making of the attraction — were chronicled in three documentaries broadcast on Discovery's cable television channels in April 2006. Rohde was featured in a Travel Channel program titled "Expedition Everest: Journey to Sacred Lands," which premiered April 9 to coincide with the attraction's grand opening.

On February 15, 2006, Disney staged an elaborate publicity stunt for Expedition Everest in New York City's Times Square, according to a report by radio station WINS:

Dangling from ropes hundreds of feet above Times Square, five acrobatic dancers and one of the world's fastest rock climbers performed cartwheels, flips and gravity-defying leaps Wednesday to promote the opening of a new ride at Walt Disney World. . . . Strapped into harnesses and hanging from nylon rope, [Hans] Florine and five other performers from the vertical dance company Project Bandaloop twirled and soared across the face of the billboard, which was done up to look like a mountainside.

The event, known as "Everest in the City", draped large billboards over sides of the several buildings. The billboards depicted Everest with a coaster car careening down the mountainside, with the Yeti looking on from another peak.

The Yeti's eyes on the billboard glowed red and would flash when the text message "4YETI" was sent to a Disney-provided phone number.

Expedition Everest under construction in January 2005

The exterior of the ride in October 2005

One of the trains ascending the main lift hill

This is a picture of the yeti. 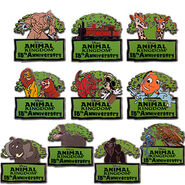 The shadow of the Yeti just before the main drop.

The complex yeti figure has the following technical details: