Disney Wiki
Register
Don't have an account?
Sign In
Advertisement
in: Objects, Marvel Comics, Agents of S.H.I.E.L.D.,
and 4 more

Extremis is a potent nanotechnology weapon that empowers its users to superhuman levels. It appeared in Iron Man 3 as the source of Aldrich Killian's powers and his subordinates empowered by it.

Extremis was developed by Aldrich and Maya Hansen in an attempt to recreate the Super Soldier Serum. Extremis rewrites the operating system of the human body, upgrading human physiology to the very zenith of human possibility. It also upgrades a subject's healing and regeneration systems, causing their hosts to regenerate any physical and mental damage almost instantaneously, making them seemingly immortal.

As well as super strength and enhanced agility and reflexes, the user of Extremis is granted incredibly fast regeneration abilities, being able to regrow whole limbs in seconds, and appear to be immortal. They can also project massive amounts of heat from their skin, enough to melt metal. It also granted the users super natural durability, with several Extremis users shown only taking minor damage from low caliber firearms.

An unfortunate side-effect is if someone takes too much Extremis, or their body rejects it, they will explode in a blast of heat measuring 3000 degrees Celsius, vaporizing anyone around them.

Aldrich Killian was able to channel the heat and breathe fire.

Dr. Maya Hansen was a research scientist working on a revolutionary process to rewrite genetic codes when she attended a 1999 New Year's Eve party in Bern, Switzerland, where she met the rising star inventor Tony Stark. The process could fasten growth and enhance healing, but had the side-effect of causing spontaneous combustions on unstable subjects. Stark left her an equation that could supposedly fix the problems in the formula, but were not fully successful.

After Hansen joined forces with Aldrich Killian and his A.I.M. company, she brought her research with her and, eventually, the development of her Extremis virus led to her leading a 40-strong team of A.I.M scientists. The downside of Extremis was its explosively unstable nature. Some hosts would accept it, and remain somewhat stable with regular infusions and treatment, while some exploded violently. When Extremis was tested on human subjects a number of them went critical in public, causing Killian to invent a terror plot cover story to keep A.I.M.'s involvement a secret.

Another concoction of the Extremis formula was used by the Centipede Project research lab and injected into several subjects, one of which was Michael Peterson.

One of the cage fighters in Xialing's underground fighting ring injected himself with Extremis. 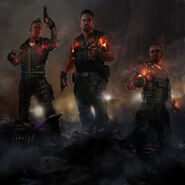 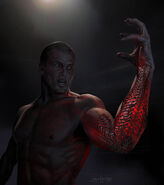