Eye of the Storm: Captain Jack’s Stunt Spectacular is a show based on the film series of Pirates of the Caribbean that will premiere in Treasure Cove's El Teatro Fandango at Shanghai Disneyland.

The theatre audience will be enthralled as Captain Jack Sparrow and his band of wily pirates romp through the theatre in search of a misplaced treasure chest. As Captain Jack is confronted first by Red Head, the beautiful star played by Yu Liang[2], and then the Royal Admiral and his men, the swashbuckling action takes off with sword fights, fantastic stunts and a raging storm.

Making its global premiere at Shanghai Disneyland, the show presents pirate humor and a remarkable finale as Captain Jack fights off the Admiral in a whirlwind adventure.

Concept Art for Eye of the Storm: Captain Jack’s Stunt Spectacular
Add a photo to this gallery 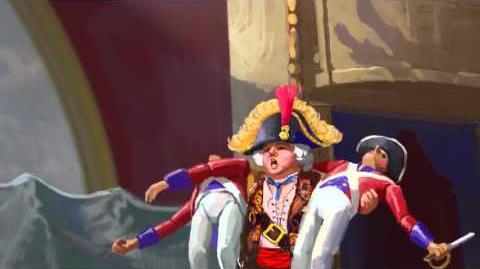 Retrieved from "https://disney.fandom.com/wiki/Eye_of_the_Storm:_Captain_Jack%27s_Stunt_Spectacular?oldid=4279097"
Community content is available under CC-BY-SA unless otherwise noted.