Dishonor, procrastination, his daughter in danger

Fa Zhou is a supporting character in Disney's 1998 animated feature film, Mulan. He is a retired war hero and the father of Fa Mulan. When an emergency calls for the aged Fa Zhou to return to battle, Mulan secretly takes his place under the guise of a man.

Fa Zhou was raised in a small village in China, to Grandmother Fa (his mother) and his unnamed late father. He was a war hero of previous, unnamed conflict, as well as was known to the extent that Shang mentioned his name with awe when it appeared on Fa family's conscription notice, even referring to him as "THE Fa Zhou." At the time of the film, he is at an advanced age, as well as limps using a crutch due to a leg injury sustained from that war. After the war, he married Li, and had a daughter named Fa Mulan.

He is shown as being fairly traditional, putting family honor before many other things, including his own health, which strains his relationship with Mulan at first. Despite this, he is shown to be understanding, as he comforts Mulan after her failed meeting with the Matchmaker by comparing her beauty to a late blossom on the family's trees. After that, however, he says to Mulan that she "dishonored" him when she was trying to help him. When Mulan returned home from the war against the Huns and presented Fa Zhou the sword of Shan Yu as well as the crest of the emperor as gifts to honor the family, he tossed them aside and embraced his daughter, telling her that he had always been proud of her.

Fa Zhou is first seen praying that his ancestors will aid his daughter Fa Mulan during her trip to see the Matchmaker. After praying he bumps into Mulan, who is carrying a teapot and cup on a tray causing her to drop them but he catches the teapot using his crutch and she brings out a spare teacup telling what the doctor told him: he needs three cups of tea in the morning and three at night. Fa Zhou then tells Mulan that she should be in town and wishes her good luck. When Mulan fails, he is saddened but comforts her while sitting underneath a cherry blossom tree, by drawing a comparison between Mulan and a late bloom on the tree.

When Chi Fu, the Emperor's consul, arrives to distribute conscription notices, Fa Zhou, as the only man in the family, puts aside his crutch and walks to accept the scroll. Out of stubborn pride, he doesn't take up the crutch again and attempts to practice with his old sword in preparation for war. However, it quickly becomes apparent that he will likely die if he goes, due to his age and injuries in the past. Having seen him practice, Mulan argues with him, stating that he shouldn't have to go as they are plenty of men to fight for China. Fa Zhou says it's his duty to protect his country and his family. Mulan still thinks it's unfair that he has to die for honor. Fa Zhou angrily yells at her that Mulan needs to learn her place, as he has learned his. Mulan then runs off in tears, but Fa Zhou ignores her and sits down to continue eating. Later that night, before going to bed, he is seen talking with his wife in silhouette trying to comfort her and she too runs off in tears, knowing that he will not survive the war.

After Mulan steals both the conscription notice and his armor to join the army in his place, Fa Zhou attempts to call to her, but he collapses as he runs. Fa Li asks him to go after Mulan, fearing that she could be killed in the war. He sadly notes that if Mulan is revealed as a woman, she would be killed, as Chinese law states that women are forbidden to serve in the army.

Fa Zhou does not appear again until the end of the film. He is seen sitting under the cherry blossom tree when Mulan returns home after the war. Mulan presents him with Shan Yu's sword and the Emperor's crest as gifts to honor the family. Fa Zhou sets the gifts aside before hugging Mulan, proclaiming that his 'greatest gift and honor' is having her for a daughter, indicating that he had always been proud of her. He speaks briefly with Li Shang, who has arrived to see Mulan under the guise of returning a helmet that belongs to Fa Zhou (which Mulan had left behind earlier). With Fa Zhou's approval, Mulan invites Shang to dinner.

Fa Zhou reappears in this film but plays a minor role. When Mulan and Shang are called to perform a task for the Emperor, he advises them that they must work together like sun and rain. Although he usually doesn't gamble, he makes a bet with Grandmother Fa, which he wins: Grandmother Fa bet that Shang would propose to Mulan before sunset, while Fa Zhou bet that he would propose before noon. His wife remarks on how he did not gamble, to which he replies that he considers gambling with his mother to be an investment rather than gambling.

Fa Zhou appears in the remake with his family name changed to Hua Zhou to make it close to the original story.

Fa Zhou makes a few cameos in House of Mouse. He was notably present during Mickey and Ludwig's bet in "Ask Von Drake".

"Mulan, you dishonor me."

Fa Zhou practicing with his sword.

Fa Zhou collapsing due to his frail health.

Fa Zhou when Mulan argues with him.

"It is an honor to protect my country and my family."

"I will die doing what's right!"

"It is time you'll learned yours!"

Fa Zhou ignoring Mulan when she runs off in tears.

Fa Zhou seeing Mulan has gone to take his place in the army.

Fa Zhou blaming himself for making Mulan run away.

His and Fa Li's Disneystrology page. 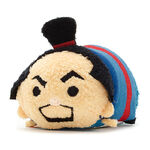 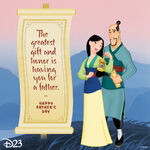 Fa Zhou in House of Mouse. 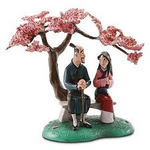 A WDCC figurine of Mulan and Fa Zhou. 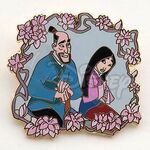