Disney Wiki
Register
Don't have an account?
Sign In
Advertisement
in: Objects, Magical Objects, The Princess and the Frog,
and 4 more

“Your little slip up will be a minor bump in the road so long as we've got the prince's blood in this.”
―Facilier to Lawrence

To transform Lawrence into Prince Naveen

The ability to physically alter the appearance of its host

Facilier's Talisman is a magical pendant that played a heavy role in the ultimate scheme of Dr. Facilier in The Princess and the Frog.

Given to the voodoo doctor by his "friends on the other side", the amulet is capable of transformation spells in two manners: it can pinch someone with its mouth-like compartment, inflicting a transformation spell onto the victim while at the same time, being able to take a sample of their blood. After taking in a blood sample, the talisman allows its wearer (except Facilier) to take on the appearance of the blood donor (though the wearer's eye color and voice do not change to match those of the blood donor). However, in order for this transformation to last, the talisman must be constantly refilled with the victim's blood; otherwise, it will run out and the wearer will slowly revert to his or her true appearance as the last of the blood is drained.

For Facilier's plot to kill Eli La Bouff, steal the La Bouff family fortune, and take over New Orleans, Lawrence wore the talisman to disguise himself as Prince Naveen in order to marry Charlotte La Bouff. However, once this is discovered by the real Naveen and his friend Ray the firefly, Naveen pulls the talisman off Lawrence and throws it to Ray. Ray starts to fly away with it, with Facilier and his shadows going after him. When he reaches Tiana, he hands it over to her and tells her to not let Shadow Man get it no matter what. Once in Tiana's possession, Tiana hops away with it as fast as she can and Facilier and his shadows corner her to get it back, but Tiana then threatens to destroy it. Facilier then changes Tiana back to human and tells her that will grant her wish for her dream restaurant in exchange for it. He reminds her of her deceased father, with whom she had shared her dream with. She almost gives it to him but then remembers that although her father never got what he wanted, he had what he needed and never lost sight of what was truly important and she will do the same. She nearly destroys it, but Facilier's shadow grabs it and hands it back to Facilier much to his joy. He then transforms Tiana back into a frog and taunts her for not taking his deal and will now be a frog for the rest of her life. However, Tiana regains the talisman with her elastic, frog tongue and finally destroys it (much to Facilier's horror), thus saving Charlotte's fortune and New Orleans. Being the most vital part of Facilier's plot, the talisman's destruction also resulted in the witch doctor's death, who was unable to pay back his debt.

"Fun fact about voodoo, Larry. Can't conjure a thing for myself."

The blood running out.

The blood runs out.

Naveen snatched by Faciler and about to have his blood reused on the Talisman.

Ray hands the Talisman to Tiana

Tiana smashes the talisman, allowing Facilier to literally be dragged to the "Other Side" by his own goons. 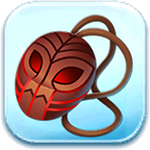 Gold trophy of the talisman in Disney Magic Kingdoms