Active
Fairy Mary is a character from the Disney Fairies films. She is voiced by Jane Horrocks.

In the first film, Fairy Mary is given the task of watching over the newcomer fairy Tinker Bell, though Tink dislikes her job as a tinker, believing it to be useless. When Fairy Mary discovers Tinker Bell's true feelings about the tinker fairies, she is greatly offended. However, Fairy Mary has high hopes for Tinker Bell. During the climax of the film, when Pixie Hollow suffers great damage from the destructive nature of the Sprinting Thistles, Fairy Mary is impressed to see Tinker Bell finally putting her talent to good use by creating innovative ways on how to set up for the fairies' travel to the mainland despite the great damage.

In the sequel, Fairy Mary recommends Tinker Bell to create the ceremonial scepter that will be used to hold the legendary Moonstone in the Autumn Revelry. She also teaches Tinker Bell to relieve stress by counting to ten. Tinker Bell uses this method when she begins to have stress whilst creating the scepter. That night, Fairy Mary attends the show at the Fairy Tale Theater. Later on, Fairy Mary is given the task of supervising the preparations for the Revelry, making sure that Rosetta, Iridessa, Fawn, Silvermist, Clank and Bobble have everything set up properly. At the finale, Fairy Mary begins to panic when Tinker Bell is running late for the festival. When she does, however, the Moonstone is shattered to pieces, but the pieces are able to create millions of more particles of blue pixie dust than the original Moonstone would have.

In the television special, Fairy Mary is partnered with Tinker Bell in the anticipated Pixie Hollow Games. 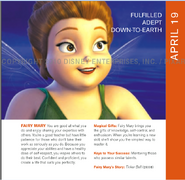 Clarion, Milori and Fairy Mary gaze at the pollen right before they fall asleep, not knowing Zarina's scheme

Fairy Mary in the credits

Fairy Mary is busy supervising the tinkers on a busy day as they weave dozens of baskets to be sent over to the Winter Woods via snowy owls. Fairy Mary's constant comments centering on the mysterious Winter Woods grow Tinker Bell's fascination of the realm even more, prompting her to cross the border over to the Woods - something that is forbidden, as the wings of a warm fairy would freeze and break if they crossed. The next day, Tinker Bell stows away on one of the baskets. Fairy Mary is too busy working to even notice, much to Tink's relief. During the climax, when the balance of the season is thrown off, and Pixie Hollow begins to freeze, Fairy Mary takes charge when the fairies and animals of the Hollow must evacuate to shelters.

Like many other fairies, Fairy Mary takes shelter inside the Pixie Dust Tree as Tinker Bell's sister Periwinkle and her frost fairy friends frost the Pixie Dust Tree to prevent it from dying as a result of the dropping temperature. When all is good, Queen Clarion and the ruler of the Winter Woods, Lord Milori, abolish the border law, allowing warm fairies to cross the border once again. Fairy Mary is then seen having her wings frost for protection, preparing to cross over to join the unity celebration (though she was obviously reluctant to do so).

Fairy Mary becomes one of Zarina's victims when she releases poppies' pollen all around the coliseum, which makes every fairy fall into a deep sleep.

Fairy Mary previously appeared in Disney on Ice: Worlds of Fantasy show from August 21, 2008 to 2015.