Fake Me to Your Leader

Chip 'n Dale Rescue Rangers
"Fake Me to Your Leader"

Professor Nimnul uses his Gigantico Ray Gun on some pillbugs, and on an unwitting Zipper, as part of his plan to fake an alien attack and extort lots of gold for "spaceship fuel".

In this scene, the Gigantico Ray Gun is shorter 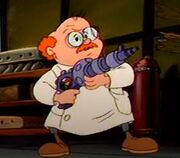 In this scene, the Gigantico Ray Gun is longer