Princess of the Forest

Geno and Gurri (son and daughter)

Faline is a female deer and one of the deuteragonists of Bambi. She is the daughter of Ena and an unknown buck. First shown as a fawn and later as a young adult doe, she is Bambi's love interest and eventual mate.

Faline is based on the character of the same name from Felix Salten's Bambi: A Life in the Woods. Several details about Faline were changed or left out in for the film. For example, in the novel, Faline is the twin sister of Gobo, a character left out of the film. Additionally, Faline's initial relationship to Bambi is omitted. In the novel, she is the niece to Bambi's mother, which would make Bambi her cousin. Walt Disney did not include any mention of this in the movie because it would have been incest when Faline gave birth to her and Bambi's twins. In certain books, their familial relationship is mentioned, which can confuse the matter. In the second book, Bambi's Children by Felix Salten, when she's taking care of her family, she later becomes an adoptive mother to two orphaned bucks, Mambo and Nello. Her children also interact with cousins, Lana and Boso, twin fawns of their Aunt Rolla in the second book.

Similarly, with the other characters, Faline is not very strongly characterized as part of the film's environmental message, since she is like any other forest deer. As a fawn, she gives the impression of a cute, wild, giggly little girl, an image which puts Bambi on the run when they first meet, until he finally manages to get a lock on her location after she steals one kiss too many from him. In the midquel where she is still a fawn, she is considerably calmer, serving as a transition between her hyperactive early personality and her maturity as a young adult.

When she appears again shortly after her meeting with Bambi, she is a beautiful and very attractive young doe and has progressed to the point where she makes her moves with what comes across as a thoroughly deliberated strategy, with the possible implication that she had been watching Bambi for some time, waiting for the perfect moment to make her approach. It is notable that she is the one who always makes the first move in their relationship, whether in mere play (as a fawn) or in romantic pursuits (as a young adult).

Although Faline appears dependent on Bambi, with him rescuing her from both unwanted suitor Ronno and hunting dogs, she does have a degree of resourcefulness, as shown by her rock climbing to escape the dogs and the fact that she made her way to a safe place after the fire. The only time she is truly calm as a young adult in the film is when she is seen at the end of Bambi with her and Bambi's twin fawns. It has been postulated that this was because, as she was now a mother, Walt and the animators decided it was only suitable that she be shown in the traditional image (for that time period) of one. Admittedly, the fact that she has just given birth to twins may also play a part.

Faline first appears when she and Bambi are introduced to each other through their mothers' meetings. Faline says to her mother Ena that Bambi is bashful to which Ena replies that he might not be if she said hello. She says hello to Bambi who after some encouragement from his mother says hello too. She immediately takes a liking to Bambi and, in her efforts to befriend him, chases him into a small pool with reeds. In a playful gesture, she teases him by popping her head in and out of the reeds to lick him on the cheek several times, much to his annoyance. However, he soon catches sight of her and gives chase himself, pursuing her into the meadow where the bucks are gathering for the season. Their meeting ends when the deer are all forced to run, due to the presence of man being sensed.

Afterward, Faline does not appear again until the second half of the film, shortly after the "Twitterpated" sequence. She returns as a young adult doe, and (predictably) she still has Bambi on the run. She actively flirts with Bambi by cornering him into getting his antlers tangled in a tree's branches, giving her the opportunity to lick him on the cheek. Her strategy succeeds without a hitch, and upon seeing Bambi's infatuation, she playfully lets him pursue her in a sequence that turns their surroundings into clouds as a representation of their romantic bliss.

However, their blossoming romance is threatened by Ronno, who interrupts the sequence to try and herd Faline away from Bambi out of a desire to make her his own. Fortunately, Bambi immediately runs to her rescue and he battles Ronno, while Faline stands back against a rock wall to watch them fight over her. The battle ends when Bambi manages to throw Ronno off of a cliff and into the water below, defeating him (although he survives). With nothing else to come between them, Bambi and Faline walk away together into a meadow and frolic through it in the night, set to the song "Looking For Romance".

Shortly afterward, she and Bambi are seen having fallen asleep together in a spot in the woods. However, when Bambi leaves while she is still sleeping to see that man has returned, she wakes up while he is still gone and, out of worry for his safety, runs to look for him. While searching for Bambi, she runs into the hunting dogs, who chase her until she is forced to climb onto the top of a rock in an attempt to evade them. She is trapped on the rock until Bambi comes to save her again, fighting off the dogs while she escapes.

Faline does not appear again until she is shown with the other forest animals in a safe place outside the forest after the fire, anxiously awaiting Bambi's return. She perks up when she sees Bambi, and they reunite happily. In the end, as a parallel to the beginning, she is seen as a new mother, having just given birth to her and Bambi's twin fawns.

Faline's overall image is the same in Bambi II. She has slightly darker coloring (she went back to lighter coloring when she grew up). She still has a huge crush on Bambi and even surprises him, making him touch his nose on hers. In an attempt to placate Ronno after she and Bambi first meet him, and possibly to spend more time with Bambi, she suggests to Ronno 'yeah, maybe you should get going' after Ronno's mother begins to call him away. Faline then offers to walk Bambi home but he tells her that his father is coming for him to which she replies that it was nice to see him again before leaving with Ena. Later in the movie, she makes a face at Bambi's attempt at a growl (Bambi was trying to ward off Ronno). Bambi's attempt at a growl, according to most viewers, sounds like a bleating lamb, which is probably why it was not very successful for intimidation. That is not enough, however, to alter her preferences; she still clearly prefers Bambi's company to Ronno's. Unfortunately, Ronno pays little mind to what Faline thinks, and when he tries to force her to go with him Faline tries to stand up for herself, unlike a similar event in the first movie, when she immediately called to Bambi for help. It is hard to say who is most surprised in this movie when Bambi tells Ronno to leave Faline alone: Faline, Ronno, or Bambi himself.

Unlike in the first movie, Faline makes no attempt to steal a kiss from Bambi. However, as her luck would have it, she doesn't need to this time. A grumpy porcupine with a grudge against Bambi takes revenge by pricking Bambi in the hind legs, making Bambi leap forward and accidentally engaging Faline in a kiss (standing face to face). After a few moments of stunned silence, Faline gives a quick smile. Bambi stumbles backward, stuttering uncontrollably and not knowing what to say (leaving viewers to decide his exact opinion of the incident), whereas Faline unsuccessfully tries with limited success to suppress facial expressions of silent joy, moving her head close to her body and smiling with her eyes closed, treasuring the incident. They then look lovingly (smiling) at each other. Faline moves her head a little closer at Bambi getting the chance of touching his nose. But Ronno interrupts the scene to swear revenge (Bambi and Faline still standing close to each other).

When Thumper complains that Bambi never has time for his friends anymore, now that he is busy spending time with his father, Faline's heartfelt opinion of the matter is, "Yeah. Isn't it wonderful?". While talking, Faline smiles, her eyes opening, closing and stop almost closed, showing that her crush on Bambi increased after the kiss.

Faline and her twin fawns, Geno and Gurri

Faline and her mother, Ena in Bambi II. 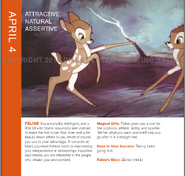 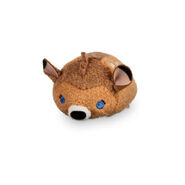 Retrieved from "https://disney.fandom.com/wiki/Faline?oldid=4470266"
Community content is available under CC-BY-SA unless otherwise noted.