Walt Disney Productions in association with The Population Council

Family Planning is an educational animated short produced by Walt Disney Productions in association with the Population Council, starring Donald Duck and narrated by Paul Frees. It is most notably the last Donald Duck cartoon produced during the classic era; Donald would not appear in another short until Mickey's Christmas Carol in 1983.

In an article about the short for Cartoon Research, Steve Stanchfield commented, "A very misplaced Donald Duck introduces the idea is his usual frantic, kid friendly way. It seems as if Donald isn’t even aware of the production he’s in, or at least no idea of what he’s presenting."[1] 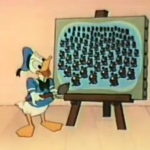