"Family Reunion – and Farewell" is the series finale of Star Wars Rebels. It premiered on March 5, 2018, and is collectively the fifteenth and sixteenth episodes in the fourth season.

The final step into Ezra's mission to liberate Lothal is about to begin, and they are going to use Governor Pryce to get them into the Imperial Complex. She at first refuses to help, but is given some encouragement when Ezra threatens to let the wolves take a bite at her. Using two of the remaining Transports they confiscated, the Rebels impersonate as prisoners with Rex, Ezra, Sabine, and Kallus impersonating as Imperials. Their plan is to launch the dome and destroy it over the city. With Pryce's help, they get clearance to land at the nearest landing platform. As Stormtroopers show up to collect the Rebels, they attack and enter the facility. The Rebels seize control of one of the command centers, and start to put the first phase of their plan into action: Have all Imperial Forces recalled to the dome for a full evacuation. Once they are all inside they will be destroyed along with the dome.

Meanwhile, back at the Ghost, Mart, Wolffe, and Vizago are on standby. Rukh, who had survived the fall, attacks them. He tries to kill Mart, but a Loth-Wolf attacks him. However, Rukh escapes in the last Transport and informs Grand Admiral Thrawn of the situation. Already on route, Thrawn orders Rukh to get inside the dome and deactivate the shield generator before the Rebels lock down the Imperial dome and then wait for his arrival. Back at the dome, Kallus gives the order to have all Imperial personal report back to the dome for immediate evacuation. The Imperials fall for it, and carry out Kallus' orders. Rukh also arrives just as the dome is locked down. With all Imperials personnel inside, the Rebels move onto the second phase of their plan, launching the dome and destroying it once clear of the city. However, Thrawn finally shows up from above the dome, grounding them. Thrawn threatens to bombard the city unless Ezra surrenders to him. Rukh has the shield generates deactivated, so the Rebels cannot raise the planetary shields. After Thrawn attacks the city, making himself quite clear, Ezra willingly surrenders on his terms. As Thrawn waits for his arrival, Ezra hands his Lightsaber over to Chopper as he makes his way to landing platform, only to be stopped by Hera. She does not want to lose him as well, and plead for Ezra not to go. Convinced that there is another way, the Rebels begin observing what they have to work with. However, while no one, except Sabine and Chooper, is looking, Ezra sneaks away and flies to Thrawn's Star Destroyer just as they come up with a plan to get the shield generators back online. Ezra arrives aboard Thrawn's Star Destroyer, and is brought before Grand Admiral Thrawn. He is then taken to a place on the ship where a part of the Lothal Jedi Temple is on board. Moved stone by stone from the planet. Waiting for them is a holographic transmission from Emperor Palpatine.

Back at the Ghost, Mart, Wolffe, and Vizago regain consciousness. Suspecting the worse, Mart orders everyone to get aboard the Ghost and take off. Earlier he was told by Ezra there was a chance that Rukh may get back to the capital and warn Thrawn about their attack. If that ever happened, he set Matt up with a special mission. The head for high orbit around Lothal so they can send out a signal beacon to someone or something. Meanwhile back at the dome, the Rebels set off to reactivate the shield generators while Sabine, Hera, Ryder, and Chopper remain in the control center with Governor Pryce. Hera cannot help but worry about Ezra.

Ezra is left with Palpatine, who offers him a tempting opportunity: a chance to live the life he could never have. Inside the temple, Ezra sees a doorway of light and can hear his parents calling for him. Ezra is astounded by this. A chance to be reunited with his parents, but he must first open the door. Tempted by Palpatine's offer, Ezra cautiously goes in for a closer look. Ezra can see his mother preparing dinner for the whole family, and continues to call for him. Ezra refuses to believe they are alive, but Palpatine recalls his experience in the realm when he saved Ahsoka. He convinces Ezra that he can save his parents by opening the gateway. However, despite the temptation and all the pain of loss he had suffered, he chooses to let them go and uses the Force to destroy the gateway. Palpatine is disappointed by this, and orders his royal guards to kill him. However, Ezra escapes from their clutches.

Meanwhile, the Rebels charge into the shield generator room and attack the technicians. Through a gun fight, they set out to get the shield generates back online, but struggle to reach the main switch. As the battle gets intense, Zeb charges at Rukh and engages him in a fight. Kallus and Gregor make it to the control panels, but Gregor gets shot and dies from his wounds. Thrawn prepares to open fire on the city, and the Rebels get the planetary shields up just in time. Rukh is also killed when the generators are reactivated. The city is saved. At the same time, Ezra shows up on the bridge of Thrawn's ship and the Imperials report that the entire blockade over Lothal has been destroyed. Then out of the clouds, the Ghost shows up with an army of Purrgil who attack Thrawn's ship. The Imperials put up a fight, but the Purrgil quickly overpower them. The Purrgil surround Thrawn's ship and capture Thrawn in their tentacles. With all grip on the ship, the Purrgil prepare for hyperspace jump. Both Hera and Sabine plead for Ezra to get out of there, but he does not. The Purrgil jump to hyperspace, and take Thrawn's ship with them, along with Ezra and Thrawn.

Everyone is silent by Ezra's departure, but receive word that they are clear of all Imperial forces. This is their chance to complete what they started. They power up the dome's thrusters, and retreat onto the roof for a pickup. Ryder offers Pryce to come with them, but she chooses to remain behind. The Rebels make it aboard the Ghost, and once the dome reaches a high and safe altitude, Sabine sets off the explosives. The dome is destroyed and with it Governor Pryce and her forces. Just as Hera is about locate Ezra's whereabouts, Chopper shows up with a recorded message made by Ezra. The recording explains the choices Ezra made were the only ones he could make. He regrets keeping them in the dark, and admits he is going to miss them all. The message then ends with Ezra thanking the Rebels for everything they have done for him, and looks forward to seeing them again soon. Even though they have succeeded in liberating Lothal, the Rebels have no doubt that the Empire will try to retake the planet. However, with the support of the entire people of Lothal, they feel confident that they can take on the Empire again should they ever try to strike back.

Five years had past since Lothal was liberated from the Empire. The attack the Rebels anticipated never came. The once invincible Empire began to fracture, the Rebellion became bold, and with the victory at the battle of Endor the Emperor's reign of terror came to an end. After the war, Zeb took Kallus to see the planet Lira San to show that he had not destroyed the Lasat people. Hera fought in the battle of Endor along with Rex. By that time she had a son, Jacen Syndulla. As for Sabine, she at first thought Ezra was counting on her to protect Lothal. But one day she realized there was more to it. Accompanied by Ahsoka Tano, Sabine sets out to find Ezra Bridger and bring him home. 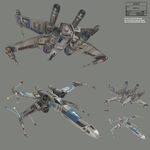 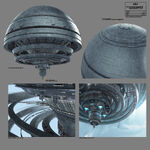 Older Sabine concept
Add a photo to this gallery

Hera and her son, Jacen Syndulla

Retrieved from "https://disney.fandom.com/wiki/Family_Reunion_-_and_Farewell?oldid=3515920"
Community content is available under CC-BY-SA unless otherwise noted.