The Simpsons: The Good, the Bart, and the Loki

The Avengers: Earth's Mightiest Heroes
Hulk and the Agents of S.M.A.S.H.
Guardians of the Galaxy
What If...?

Chris Cox (The Avengers: Earth's Mightiest Heroes)
Benjamin Diskin (Hulk and the Agents of S.M.A.S.H.)
Trevor Devall (Guardians of the Galaxy)
Max Mittelman (What If...?)

The Marvel Comics character of the same name
Errol Flynn

Fandral is one of the Warriors Three. His fellow warriors are Hogun and Volstagg.

Fandral was created by Stan Lee and Jack Kirby.

As one of the most skilled warriors in Asgard, Fandral is a serious man. He's loyal to his friend and fearful for his enemies, but he's extremely polite, even on the battlefield. Although he's often irritated by Volstagg's endless appetite, he'd give his life for his teammates.

Fandral is a master swordsman, with centuries of experience in hand-to-hand combat and with the foil. Thor refers to Fandral as "the best of us with the blade. As an Asgardian, Fandral also possesses the physical attributes of an average Asgardian male; he possesses superhuman strength, speed, durability, stamina, and longevity. His dexterity, speed, and agility are all significantly greater than the average Asgardian male. However, despite his long life, he is not completely immune to death or aging. In addition, Fandral possesses a healing factor that enables him to recover from grievous injuries within a short time, depending on the damage degree. However, he isn't able to regenerate severed limbs or missing organs.

Thousands of years after the war between Asgard and Jotunheim, Odin would give way as King to his son, Thor (very despite the discontent of Loki). However, the ceremony was interrupted by Frost Giants who wanted to retrieve the Casket of Ancient Winters. This intrusion angered Thor who asked Fandral to accompany him to Jotunheim and put an end to the cold war between the two races. Fandral and others traveled to Jotunheim, even though they thought it was a bad idea. Here, they fought against Jotuns, who quickly surpassed in number and power. Fortunately for them, they were saved by Odin.

He watched as the all-father vanished Thor and send him to Earth. Days later and after Odin falls into Odinsleep, Fandral and his friends asked Loki to forgive Thor and allowed him to return from his exile. Loki refused this request since for him that would be the wish of his father. As Loki refused, Fandral and the others Warriors three and Sif traveled to Midgard, even though they knew that it could cause their banishment. Here, they revealed to Thor that his father was not dead, only sleeping, finding out that Loki was behind all this.

When the Destroyer arrived, he and other warriors bravely fought against the armor, but they quickly were overpowered by the machine. He witnessed how Thor sacrificed himself and so regain his powers. With the Destroyer defeated, Fandral and his friends return to Asgard.

During the Battle of Vanaheim, Fandral, Sif and the others Asgardians fight against the Marauders until Thor arrives and decides to fight with a warrior Marauder. Thor smashes Korg with one blow of Mjolnir, seeing this Fandral says that the next time they should start with the biggest. Fandral and the others return to Asgard to celebrate the victory.

When Algrim freed the prisoners from their cells, he and Volstagg fought against them while he said that it seemed that the prisoners resented their confinement. After the attack of the Dark Elves, Volstagg and Fandral informed Odin that their defenses were destroyed during the attack. That same night, Thor, Heimdall, and the Warriors three devised a plan to prevent another attack, which consisted to release Loki from prison and so he was able to help them to go to the land of the Dark Elves. While fleeing, Fandral fought against Einherjar guards, allowing Loki and Thor traveled Svartalfheim to save Jane.

Fandral and Volstagg are in charge of the Bifrost when Hela appears, having subdued Thor and Loki. She promptly stabs Volstagg in the chest with a dagger, then hurls another in Fandral's chest when he attempts to stab her before finishing them both off by impaling them with a single dagger.

During "The Siege of Asgard" Fandral is one of the Aesir who helps the Avengers when the heroes are stranded in the Nine Realms. 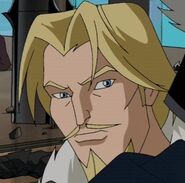