Nurse (once in Great Guns)

Oswald, playing hard to get, swimming

Francine "Fanny" Cottontail was the original love interest for Oswald the Lucky Rabbit, appearing in his earliest cartoons up to All Wet.

In her earliest appearances, she was a very conservative and innocent rabbit, very closely resembling the character designs of Ortensia and later Minnie Mouse. Toward the end of her run in her Oswald cartoons, she became progressively more sultry and flirtatious, culminating in her last appearance in All Wet, where she ended up bordering on femme fatale.

Like Ortensia, her name was never clarified to the public in the shorts, only seen on official copyright documents and the book: Walt in Wonderland: The Silent Films of Walt Disney. Curiously, she was identified as Ortensia herself back when Ortensia was nameless (despite being a different species) in Universal Pictures' official copyright synopsis.[1]

Fanny was originally supposed to be in Epic Mickey, but Ortensia ended up being used in her place.

As she was to appear in Epic Mickey 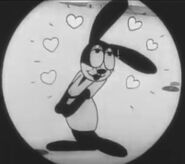 Fanny as Oswald's sister (Candy House, 1934).
Add a photo to this gallery

Fanny reappears in a 1934 Lantz cartoon, "Candy House", and was reworked to be Oswald's sister instead of his love interest.

Retrieved from "https://disney.fandom.com/wiki/Fanny?oldid=3671115"
Community content is available under CC-BY-SA unless otherwise noted.