Unlike Disneyland's previous Christmas parades, Fantasy on Parade was convieved to be a "show on parade" in which the various units would occaisionally stop along the parade route to perform dances and routines for the guests.

The parade consisted of various units featuring characters and elements from Walt Disney's animated film classics, which would vary throughout the years with new units and characters based on more recent films.

Ticket for the premiere of the inaugural parade,

Premiere ticket for the 1967 edition.

The Reluctant Dragon from the 1965 edition. 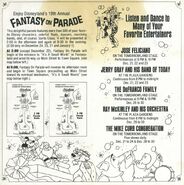 Add a photo to this gallery
Retrieved from "https://disney.fandom.com/wiki/Fantasy_on_Parade?oldid=4245851"
Community content is available under CC-BY-SA unless otherwise noted.