April 15, 1983
Fantasyland is one of the themed lands at Tokyo Disneyland in Japan. It has two original attractions among the usual dark rides: Cinderella's Fairy Tale Hall (a walk-through attraction which tells the story of Cinderella) and Pooh's Hunny Hunt (a dark ride that uses a trackless ride system).

Alice in Wonderland was the theme for the new area replacing the old It's a Small World, moved next to Space Mountain. However, it has been canceled due to the Tokyo 2020 Summer Olympics not having enough contractors, and will be replaced by Fantasyland Forest Theatre, the indoor theatre, The Happy Ride with Baymax in Tomorrowland, and Minnie's Style Studio in Toontown.[3][4] 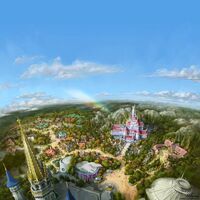