Guido Martina scarcely used the character, since his role was limited to be Donald's inspiration, but Italian Disney comic artist and writer Marco Gervasio expanded on the character and his background, at first as part of flashbacks in Duck Avenger stories and later with a mini-series happening in the past. Fantomius lived in Villa Rosa with his fiancée and partner in crime Dolly Duck a.k.a. Dolly Paprika.

Some Danish comics show an aged yet still living FantomAllard who returns to Duckburg to test his successor, but he mistakenly believes Gladstone Gander to be the Duck Avenger, as Gladstone was the original inheritor of Villa Rosa. 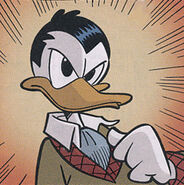 The Duck Avenger faces an older "Danish variant" of Fantomius. 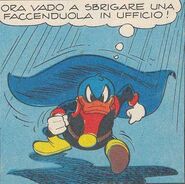 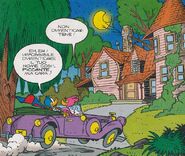 Fantomius and Dolly Paprika in Villa Rosa by Marco Gervasio 2012

Daisy and Gladstone pretend to be Dolly Paprika and Fantomius by Romano Scarpa 1970
Community content is available under CC-BY-SA unless otherwise noted.
Advertisement