Disney Wiki
Register
Don't have an account?
Sign In
Advertisement
in: Television episodes, The Proud Family: Louder and Prouder episodes

"Father Figures" is the fourth episode of the Disney+ animated series, The Proud Family: Louder and Prouder. It premiered on March 9, 2022.

When Penny discovers who Maya and KG's parents are, she becomes the lone voice of tolerance in her community, butting heads with her father Oscar's prejudices.

In the Proud Family garage, Oscar shows Felix a scale model of his latest creation. He will construct the “next great American amusement park” called Snackland, which is themed after Suga Mama and Proud Snacks. Felix, given his dislike for snacks in general, bails out from the plan by digging a tunnel through the garage floor. Meanwhile, Penny and her friends watch a live musical show called Wizard Kelly on the Telly, and are disgruntled with LaCienega going solo with a music video of her own. However, her attempts to win are foiled when Little Wizzy beats her by 2,325,017 votes. Penny laments over not being able to see Pink i, until Barry, who is Sunset's new partner, reveals that he is working security at the concert and invites them to come, complete with backstage passes. Felix, for some reason, doesn't want her to go. At the concert, Maya and KG's father Randall is introduced to Penny and the gang. After putting two and two together, Dijonay realizes that Barry and Randall are both their fathers and while she promises to Penny to keep her lips sealed, she goes against her promise of tweeting about it to her social media followers.

Public indignation over Maya and KG having two fathers reaches fever pitch and the two of them are ostracized at school by their peers, who obviously do not understand the concept of their family's marriage. Even Frankie thinks "double daddy's boys" mean nothing to him. LaCienega, remembering the time she was teased for her feet, treats it like it's nothing. After Dijonay confessed that she tweeted about it, Penny says it doesn't matter that Maya and KG have two dads and that they should be tolerated, citing Oscar as a better influence than any of her friend's fathers. After LaCienega, Djonay and Zoey leave for their own agenda, Michael and Penny join Maya and KG at the table. After making a couple bad jokes, Maya leaves the table. KG tells Penny and Michael that Maya is sensitive about "jokes" like that, and they shouldn't joke about who has mothers and fathers, and who doesn't. He also reveals that he and Maya are adopted. Penny is left alone at the lunch table, embarrassed over her blunder. Returning home, Penny expresses her observation of people's ignorance to Oscar, who at the same time, forbids her from seeing Maya and KG again.

Despite not taking Penny's complaints seriously, based on his own philosophy that life isn't fair, Oscar decides to move his dream from the model phase and into the real world. To accommodate funding for the construction of Snackland, he goes to the bank for a loan and is appointed to the office of Randall Leibowitz-Jenkins who introduces himself...and Barry who is revealed to be his husband. Barry arrives with Randall's lunch and the two share a kiss (offscreen), causing Oscar's eyes to crack. Even though Oscar's loan is approved, he is in hysterics at the sight of two men being married and leaves. Things get tough for Maya and KG when they refuse to loan the Gross Sisters money for their new album and Penny decides to stands up to them. Barry and Sunset come to the rescue by inviting them to have gumbo for dinner. KG, however, bails and Nubia swears revenge for making Olei cry. Penny proudly announces her success and they head over to KG and Maya's house to celebrate.

In spite of his cracked eyes, Oscar goes over to the Leibowitz-Jenkins house where he introduces Randall to Trudy and Suga Mama (calling her a "young man" in the process). As it turns out, Dijonay invited her school over to the house so that everyone, including Frankie, could apologize for their ignorance. Oscar apologizes as well, and Randall, relying on the philosophy that "brothers gotta stick together", encourages Oscar to look at the world through Penny's eyes. Oscar happliy agrees to this and joins his family and the other guests for a dance sequence set to "September" by Earth, Wind & Fire.

One week later, Oscar introduces his family to the foundations of Snackland, which is a toxic waste dump. Frightened by the sight of it and Oscar's implied insanity, they leave him at the mercy of a six-eyed fish...and some quick sand. 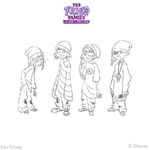