Tauntaun
Animals such as horses, dogs, cats, and lions

Fathier is a large quadruped creature from the Star Wars franchise who made its debut in Star Wars: The Last Jedi. Fathiers are often used as mounts, making them akin to the terrestrial horse.

Fathiers are tall, warm-blooded, equine-esque creatures found across the galaxy (particularly Cantonica), although their planet of origin is unknown.[1] A fathier stands up to 3 meters at the shoulder.[1] With their lean build and long legs, the race is built for running, the fastest a fathier can go is 50 mph.[2] Their large ears are a cooling mechanism and serve as air-sheering rudders to control their runs.

Fathiers are domesticatable, so they are sought after for racing competitions. In Canto Bight, fathiers are exploited for racing by the wealthy residents in the city's racetracks, where they are subject to abuse by the overseers.

A herd of fathiers were presented at the racetracks of Canto Bight. However, one of the fathiers was being mistreated in the stalls by the overseers; the scene was witnessed by Finn and Rose Tico. Rose sympathizes with the creatures' plight, due to her childhood fascination with fathiers. After Finn and Rose were arrested and escape their cell, they enter the stalls holding the fathiers, among which are the child caretakers of the beasts. Finn convinces a stable boy named Temiri Blagg to release the fathiers for the animal's well-being. With the boy agreeing on these terms, the duo let loose the fathiers to escape the police, and the herd runs amok in the city's business district. The fathiers soon settle at a meadow; before departing, Rose takes off the mount of the fathier who helped them as a sign of its newfound freedom.

Concept art of the fathiers. 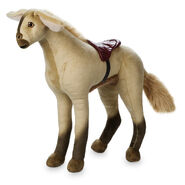