"Fawn's Animal Group Song" is a song sung by Fawn in the Disney Fairies short, "Tink'n About Animals". When Fawn mentions to Tinker Bell, Rosetta, Iridessa, Silvermist, and Vidia that a group of crocodiles is called a float, Tinker Bell asks Fawn to share more knowledge of animal groups. So, Fawn promptly pulls out her Animal Group Songbook.

Fawn: Well...
Geese live in a gaggle and coyotes in a pack
And a group of jellyfish is called a smack
Here's a rookery of seals and an army made of ants
By the seashore, you can find a gulp of cormorants
Zeal of zebras, hover of crows,
Lions are prides, as everyone knows
There are quivers of cobras and shivers of sharks
And an exaltation is a group of larks!

Fawn: You've got prickles full of porcupines, consortiums of crabs,
And a loveliness of ladybugs just looks so fab!
A kaleidoscope of butterflies, a scurry full of squirrels,
And this bloat of hippopotami are happy girls
Circus of puffins, gaze of raccoons,
Stand of flamingoes, troop of baboons
A group of bucks becomes a clash,
But rhinoceros can make an even bigger crash!
(Fairies: Whoa! Oof!)

So, kangaroos can form a mob, iguanas are a mess,
Even friendly ravens are an unkindness
Goldfish are a troubling, pandas are embarassments,
But a wise old bunch of owls form a parliament
Shrewdness of apes and mischief of rats,
Business of ferrets and cauldron of bats
And although it's strange credulity,
These wildebeest are an implausibility! 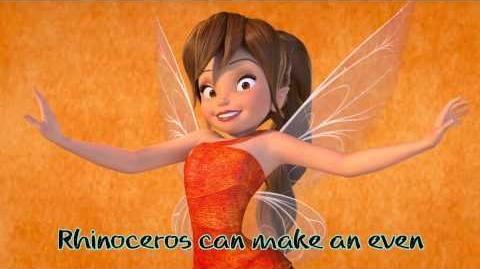 Retrieved from "https://disney.fandom.com/wiki/Fawn%27s_Animal_Group_Song?oldid=3796635"
Community content is available under CC-BY-SA unless otherwise noted.